(Long Island, NY) Sexy Hamptonites attended the third annual St. Barth Hamptons gala in Bridgehampton. The event took place at the Bridgehampton Historical Society on July 19, 2014, from 6 PM to 10 PM in a billowing white tent under the stars. The festive evening featured exquisite hors d’oeuvres, the finest cocktails and champagnes, a Starbucks Coffee Bar and an Exclusive Escada Lounge.

The French-isle inspired fete celebrated the American beauty’s July cover story of Brooke Shields in the luxury lifestyle publication, Social Life Magazine which hit newsstands that same day. The event was a mixture of fashionable trendsetters and celebrities enjoying the evening while listening to Caribbean music.

Brooke, there to promote her cover story in Social Life Magazine, is an American actress, model and former child star. She was born in 1965. Brook Shields started her career as a child model and quickly gained critical acclaim for her leading role in Louis Malle’s controversial film “Pretty Baby” filmed in 1978. In this role Brooke played a child prostitute in New Orleans at the turn of the 20th century. The role garnered Shields widespread notoriety, and she continued to model into her late teenage years and starred in several dramas in the 1980s, including “The Blue Lagoon” in 1980, and Franco Zeffirelli’s “Endless Love” in 1981. 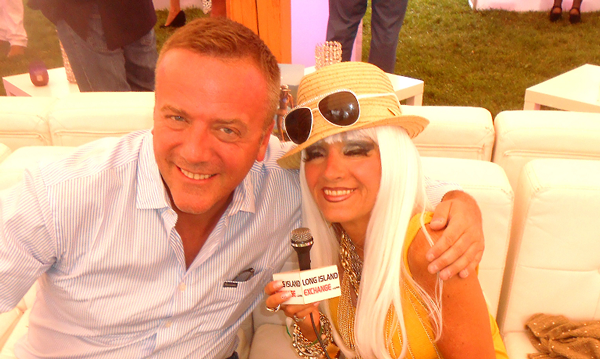 Pete Holmberg from Open Communications and Entertainment Journalist Cognac Wellerlane pose for a photo-op at St. Barths in the Hamptons.

In 1983, Shields abandoned her career as a model to attend Princeton University, where she graduated with a bachelor’s degree in French literature. In the 1990s, Shields returned to films appearing in minor roles in films starring in the titular role of the sitcom “Suddenly Susan” which ran for four seasons between 1996 and 2000. Most recently, Shields has made appearances in other television shows, including “That ’70s Show” and “Lipstick Jungle.”

I had the pleasure of interviewing Pete Holmberg, Director of Consumer Marketing at Open Communications about St. Barth Properties. St. Barth Properties has been orchestrating dream vacations, exclusively,on the beautiful island of St. Barth since 1989. The company was founded by President Peg Walsh whose passion and commitment to service the Caribbean vacationer has annually earned her Condé Nast Traveler’s Villa Specialist Award, from its 2006 inception. St. Barths Properties has been named the Best for St. Barth. The company and its team of St. Barth Specialists has also been recognized by Travel + Leisure as one of the best villa rental agencies – worldwide. This beautiful island formally known as Saint-Barthélemy and nicknamed St. Barts, is the jewel of the French West Indies. St Barth is the only island St. Barths Properties represents, guaranteeing everyone the highest level of expertise. St. Barths Properties combines a team of St Barth Specialists with an intimate knowledge of the island and who personally inspect all properties on a regular basis and a superior selection of more than 150 private villas.