LONG ISLAND, NY – What do most budget-conscious people do on a weekday night? They might attend the latest flick, go out for cocktails or eat at a modest restaurant in their community or they may spend a cozy night at home and entertain themselves. Now there’s a new choice that is guaranteed to be fun, entertaining, and can involve one person, a couple, or a group of friends and do it all for less than the price of a movie ticket.

Game On Trivia Night is now weekly before a live audience in Rockville Center. Until now the interactive Game On had been on Facebook only. Host Mike Hope would ask a weekly trivia question and Facebook fans would text in their responses for prizes. With over a thousand people responding a week, Hope decided to take Game On before a live audience. 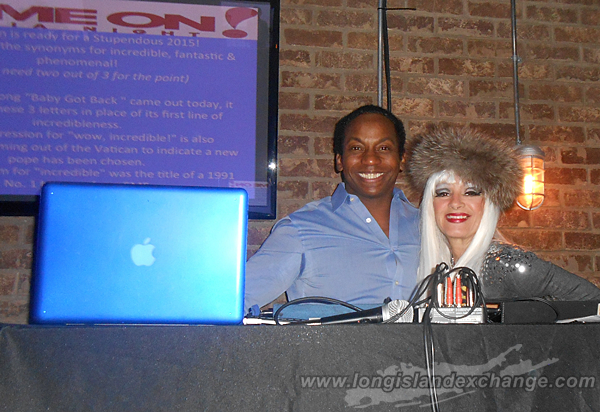 I had a chance to attend one of these events at Parlay Restaurant in Rockville Center and interview Game On Trivia Host Mr. Michael Hope who created Game on Trivia.

I am here with the fabulous host from Game Show Trivia, Mr. Michael Hope, welcome.

Michael: Thank you. We have a great night, It’s Game Show on Trivia.

Tell my audience what Game Show on Trivia is all about.

Mike: Game Show on Trivia is a fun night out. People come, we ask questions, they answer the questions and the team with the most points wins. It’s a fun social night out. It’s like being in a game show but it’s live.

Interesting, fascinating. Now tell my audience how people participate in this game, This Game on Trivia.

Mike: The best way to play is actually in a team. You can play in a team of two up to six people. If you come with a larger group, you can break it up into smaller groups.

So participants do play in a team. Let me ask you are you the only host or are there other hosts?

Mike: Game on Trivia was started in one location about three years ago and thank goodness we have been working very hard. We put on a fantastic show that people really like so we are up to eighteen or nineteen locations right now.

And you are the only person that hosts it!!?

Mike: We have about seven other hosts.

Why did you want to do this? How did you get into this?

Mike: I love game shows. I have been a trivia fanatic for a long time and I was always playing along on TV and my family said “Mike you should be  on a game show,” So I actually tried out on “Who wants to be a Millionaire” and I realized that I wasn’t great in sports so what I did was I started sports trivia. What I did was I started going on other trivia locations and I always noticed how not fun it was. I thought it could be done better. So I took my entertainment experience and put together my love of trivia and put together The Game On Trivia Show.

Mike: I have been and MC and a DJ for over ten years, corporate events, weddings, sweet 16, so I took that love of making everybody have a good time with my love of trivia and put it together and it became a game show.

You parlayed it into this. Fabulous!

If my audience wants to find out more information on Game Show on Trivia where can they go. What is the website?

Mike: There is a website. You can go to facebook/Game on Trivia or you can go to our website www.gameongameshow.com

This promises to be a fun and exciting evening and something totally different from anything else you’d find at a bar scene. What’s more is that each Game On Trivia Night is a unique ‘Game show experience’ that will be remembered and can be shared with friends and family alike.