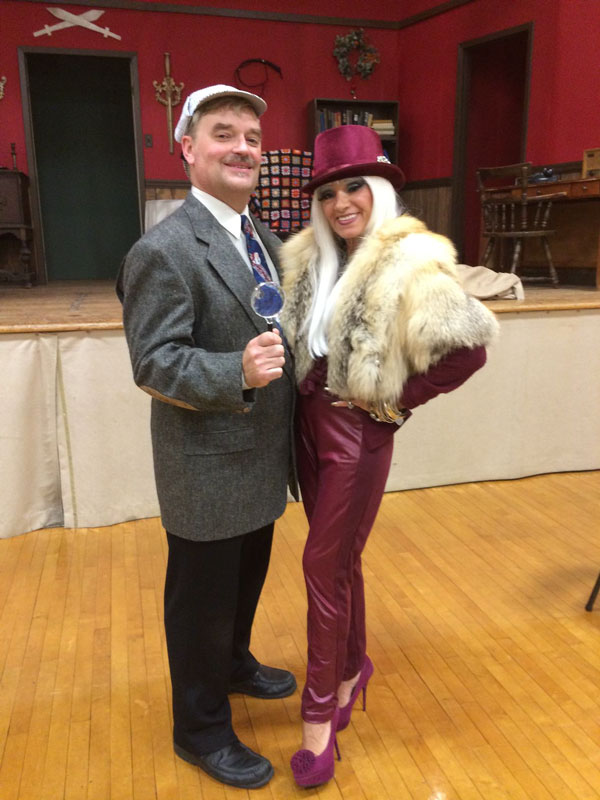 The Minstrel Players are thrilled to be the first area group to stage this award-winning Sherlock Holmes inspired production. The story takes place on December 24, 1936 and Broadway Star William Gillette is admired throughout the world for his portrayal of Sherlock Holmes. He has invited his fellow cast-member to his Connecticut mansion for a weekend of cheer and revelry. Suddenly one of the guests is stabbed to death and his holiday weekend turns his isolated house of tricks and mirrors into a dangerous place to stay.

It’s up to Gillette himself as he assumes the persona of his beloved Sherlock Holmes to solve the crime and track down the killer. The suspense and hilarity are non-stop amusing everyone in the audience. It is certainly a glittering whodunit set during the Christmas holidays. Ray Palen is brilliant in the role during this two hour production.

His character, Willliam Gillette, was an American actor, playwright and stage-manager in the late 19th and early 20th centuries. He is best known for playing Sherlock Holmes on stage and film..

Gillette’s most significant contributions to the theater were in devising realistic stage settings and special sound and lighting effects. His performance of Holmes helped create the modern image of the detective. His use of the deerstalker cap (which first appeared in some Strand illustrations by Sidney Paget) and the curved pipe became durable symbols of the character. Gillette played the role onstage more than 1,300 times over thirty years. He also starred in a silent motion picture based on his Holmes play, and voiced the character twice on radio. While most of Gillette’s work has long been forgotten, his last great masterpiece is still well known today: Gillette Castle in Hadlyme, Connecticut.

The castle is situated on top of a hill, part of the Seven Sisters chain, over a ferry’s pier in Hadlyme. The design of the castle and its grounds features numerous innovative designs and the entire castle was designed, to the smallest details, by William Gillette .

Ray Palen’s goal is to one day be as famous as William Gillette for portraying Sherlock Holmes, Conan Doyle’s infamous sleuth. Ray was just recently seen on and off stage as actor/director/writer for the recent One Act Play Festival — SCENES FROM THE ZONE. Mr. Ray is especially thrilled about the latest venture, Minstrel Academy, where he teaches most of the courses. ” It is an outstanding way to pay it forward and work with some great like-minded individuals who are true students of the acting craft and seeking to keep their skills sharp,” Palen revealed. Ray was blessed to have attended The American Academy of Dramatic Arts in NYC where he was trained by a number of supremely talented actors including: TV star, Brian Markinson, and Oscar-winner, the late Jennifer Jones. He also received private vocal lessons from Tony winner, Ron Raines, and was personally coached by the late stage/screen legend, Allan Jones. Ray has performed in hundreds of productions since childhood and has a soft spot for mystery/thrillers. His inspirations for THE GAME’S AFOOT include, of course, William Gillette as well as the indomitable figure of Sherlock Holmes. Ray remains steadfast in his goals: working for Walt Disney World, playing CF for OUR New York Yankees and being named the first American Dr. Who. Break a leg to the enormously talented Cast and Crew and all my love to Debbie and (the littlest Minstrel) Princess Anna.

The Minstrel Players mission is to provide “World Class” entertainment at an affordable price. Above and beyond that, The Minstrel Players seek to work with other actors and theatre professionals who share the same love of acting. This includes buying into the concept of “checking your ego at the door” – an ideology that has worked well for this tight-knit group. They truly believe that putting together the right chemistry of talented actors creates a quality high level performance in every way.