The Queensboro Bridge, also known as the 59th Street Bridge, is a cantilever bridge over the East River that connects the neighborhood of Long Island City in the borough of Queens and Manhattan, New York. The bridge is the westernmost of the four East River spans that carry a route number: NY 25 terminates at the west (Manhattan) side of the bridge. It is commonly called the “59th Street Bridge” because its Manhattan end is located between 59th Street and 60th Streets. The bridge has two cantilever spans, one over the channel on each side of Roosevelt Island. It does not have suspended spans, so the cantilever arm from each side reaches to the mid-point of the span. The Queensboro Bridge carries an approximation of 200,000 vehicles per day (AADT), making one of the most traveled bridges in the world. Nearly a century later, its main cantilever span still remains the 12th longest in the world. 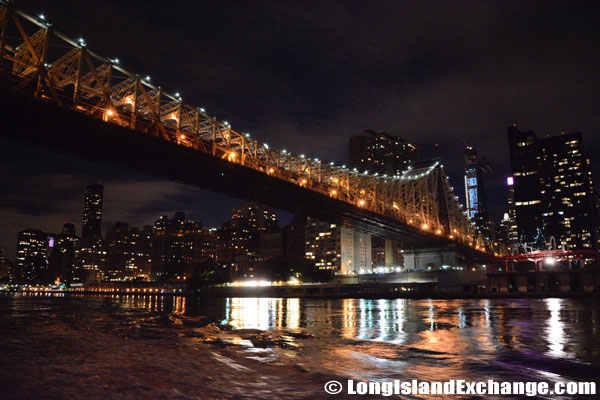 As early as 1838, Queensboro Bridge was originally referred as christened Blackwell’s Island Bridge and intended to link Manhattan’s Harlem Line with the Long Island Railroad. As opened in March 1909 at a cost of $20 million and 50 lives, the upper level had two sidewalks with stringers for a future elevated line down the middle, and the main lower level had a roadway for automobiles across the same space, with a streetcar track on each side, and another streetcar track on each side outside the main bridge trusses. Once built for trains and trolleys, the rail tracks did not last even until the end of World War II and the last of the trolleys was seen around 1950. The Queensboro Bridge has been quick and agile to adapt to changing transport habits, and gradually transformed both decks for vehicles, for which it has had 10 lanes since the 1980s. The Queensboro’s completion preceded that of the Manhattan Bridge by nine months. In fact, the bridge has been immortalized by various artists and musicians including Simon & Garfunkel in their hit song, “The 59th Street Bridge Song/Feelin’ Groovy”.

The elegant Queensboro Bridge has served the community with devotion for almost a century now. It has reigned during a period of unprecedented prosperity for New York, remaining steadfast even during the depths of the depression. It can stake claim to have had a considerable hand in the transformation of Queens from a rustic and somnolent countryside, to a beehive of activity that has leveraged the tinsel world of Manhattan for its own benefit. The Queensboro Bridge is also the start of NY 25, which is more than 100 miles long, and reaches all the way to East Point in Long Island.

After years of decay and corrosion, the New York City Department of Transportation (NYCDOT) announced a long-term project to rebuild the Queensboro Bridge. They hired the engineering firm Steinman, Boynton, Gronquist and Birdsall to oversee the project. The renovation started in 1987 and is still in progress, having cost over $300 million. It involved resurfacing the lanes for vehicles and strengthening the basic structure. This took 5 years. The restoration project has gone beyond the bridge itself and extended to the neighborhood around the Manhattan end of the Queensboro Bridge. This part was done around 2000 and has resulted in the opening of exclusive retail stores and a fine restaurant.