LONG ISLAND, NY – North Shore Historical Museum members and supporters joined in for a celebratory cocktail party for the Museum’s 2nd Anniversary in the historic 1907 Justices Court building on Jan 31, 2015.

The event honored Brian Mercadante’s long tenure at the helm as President of the Museum. The event featured food and beverages and a videographic history of the two years since the Museum opened in January of 2013 with highlights of the many exhibits, guest lecturers, authors, theatrical events, historical presentations, and film and musical events hosted by NSHM. Guests also enjoyed meeting ‘faux-mous’ dignitaries, such as J.P. Morgan, Jr. and Teddy Roosevelt,.

At the event I had a moment to chat with Chair Victoria Crosby. 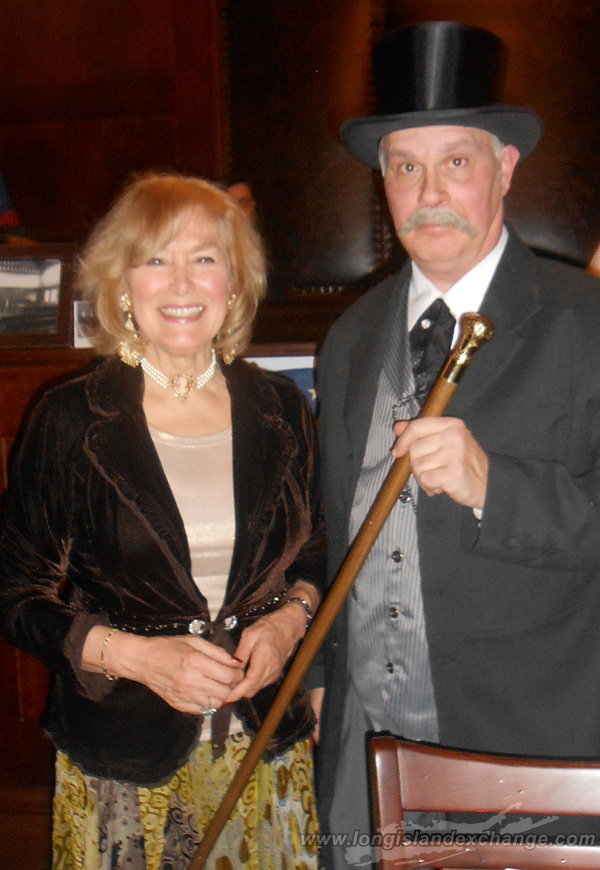 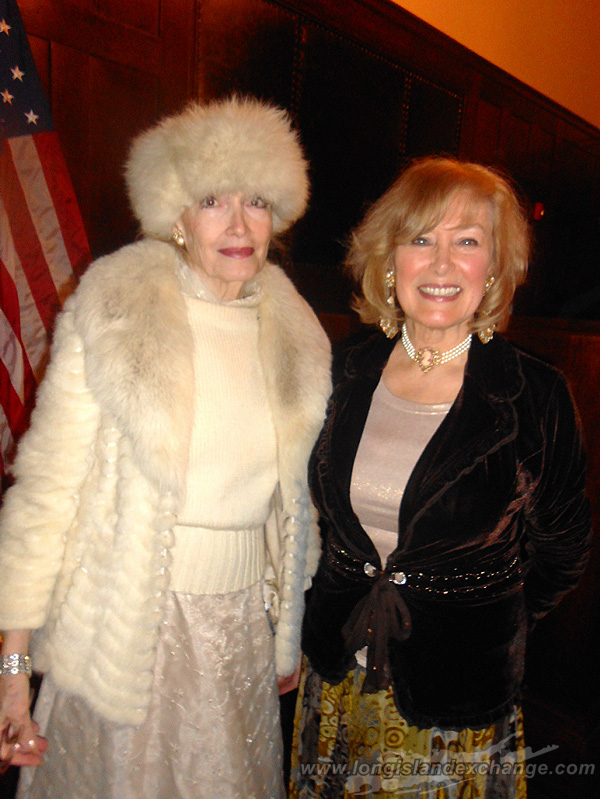 I am here with the Chair of the event and she is going to introduce herself to the camera.

Victoria: I am Victoria Crosby. I am a board member and former vice-president of the North Shore Historical Museum.

Tell my audience about the event this evening.

Victoria: This event is to celebrate the second anniversary since the museum has been opened and also to honor Brian Mercadante who has been the president for our organization for seventeen years. Seventeen years ago he got the idea to turn this building into a museum. It was a court house and it was built in 1907 and there is a jail cell downstairs. You can see there is a court room here. It hadn’t been used for many years. It was empty and decaying and deteriorating quit badly. So once we had the charter to make it into a museum we had to raise the money to restore it to the way it looked in 1907 and that’s we we did.

Over one hundred years old is this building?

Victoria: Over one hundred years old is this building; we restored it to look the way it did then because it had changed over the years and now it has opened as a museum for two years.

It’s beautiful and so fitting to make this government building into a museum. Tell my audience again the year it was established.

Victoria: 1997, but the museum didn’t open until two years ago.

And now this is your 2nd anniversary?

Victoria: This is the second anniversary of the year we opened as a museum. We got a charter first and then we had to raise some money in order to fix the inside and outside of the building.

Lovely. Now why did you get involved in all of this?

Victoria: Well, I have been living in the community for thirty years and very involved in many aspects of Glen Cove and the surrounding area. I am very interested in history particularly the old mansions.

Oh, they are just gorgeous!

Victoria: So when I heard about this, I was very interested in getting involved and I have been involved for at least fifteen years.

The Great Gatsby, that house was in Long Island. Where was that house located?

Victoria: Well, it was fiction.

Victoria: But it was suppose to be Great Neck.

Oh, it was Great Neck. I see. I wasn’t sure. I thought it might have been Glen Cove.

You are in character right now?

Victoria: Yes, I am suppose to be Mrs. Vanderbilt.

I love it. I would like you to tell my audience where we can go to get more information about the North Shore Historical Museum.

Victoria: You got to go to www.northshorehistoricalmuseum.org that’s our website and you can find out all about us. We have this exhibit on now which is at an end. We will be getting a new exhibit in a few weeks and our exhibits are changing. We have lecture series, we have some wonderful events here. We did “A Few Good Men,” because it is a play set in a court room. I don’t know if you know that the movie “North By Northwest,” was filmed here.

Victoria: Partially here. The court room scenes were right here in the court room and the jail cell downstairs was also part of that movie. Cary Grant was here. We showed the movie last year on the 55th anniversary of its filming.

Wonderful. Tell my audience one more time the website.

I also spoke to Mayor Reginald A. Spinello of Glen Cove who presented the award to President Brian Mercadante for his dedication and hard work. 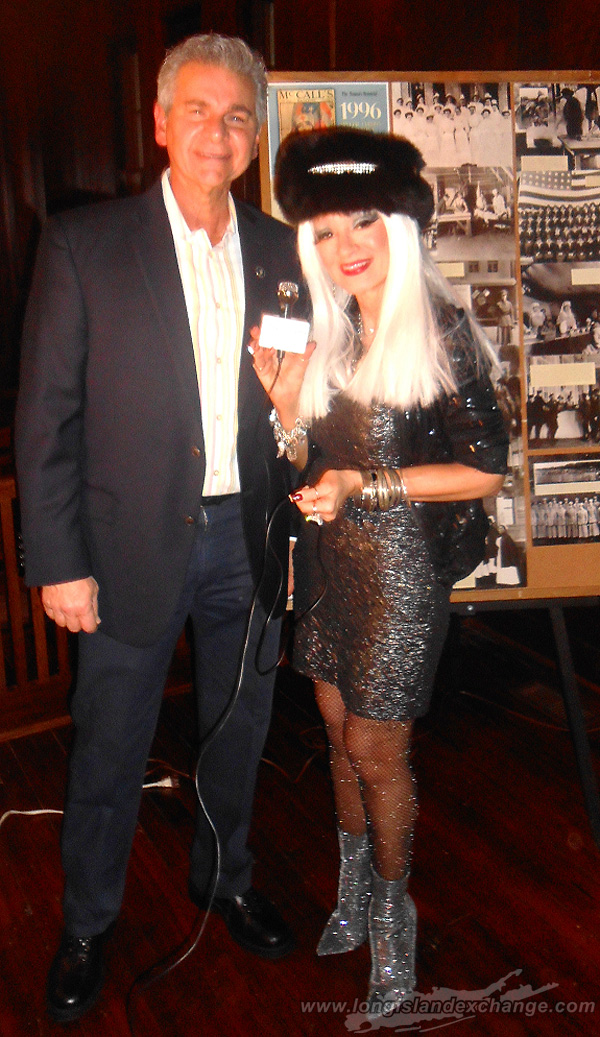 Mayor Reginald A. Spinello of Glen Cove and Entertainment Journalist Cognac Wellerlane at the North Shore Historical Museum on Jan 31, 2015.

This is a very exciting thing for this museum to be a part of the community. Tell my audience how thrilled you are that the museum is celebrating its second anniversary.

Mayor Spinello: This is a wonderful event. Brian Mercadante who had the vision, has restored, I should say a 1907 court house. It’s been embraced by not only the city of Glen Cove but the surrounding communities. They have wonderful events here. They have lecturers, they have exhibits, it is well received. It really is a nice little addition to our great city.

Tell my audience a little more about Glen Cove. Why is it a very significant part of Long Island?

Mayor Spinello: Glen Cove is beautiful. Glen Cove is part of the Gold Coast. We have many mansions in the greenbelt area. It is a waterfront community. We are in the beginnings of a revitalization. We have this year a waterfront project starting, a one billion dollar project that would be 1,000 residential units, restaurants, a marina, commercial retail and we are also redoing our downtown. We have a mixed use development company coming in that will change Glen Cove from a bedroom community to a vibrant happening downtown. Glen Cove has a lot of tradition, lots of history. Most people that you see in Glen Cove have been born and raised and stay here. You go in the morning to have breakfast in the local coffee shop. It’s like a throw back to the olden days and everyone knows everyone and there is a friendly good morning and good cup of coffee. So it’s a great place.

Lastly I had the privilege to talk to the President Brian Mercadante. 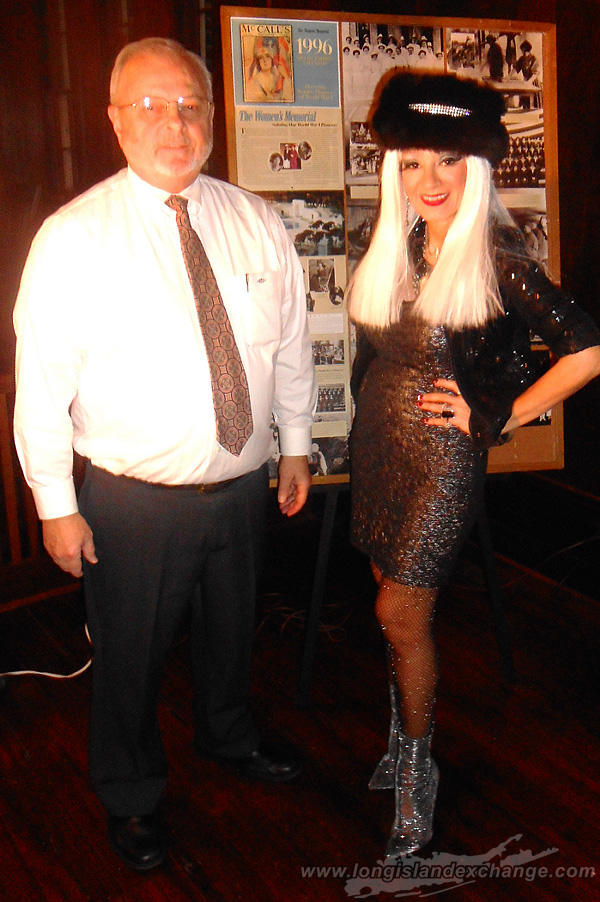 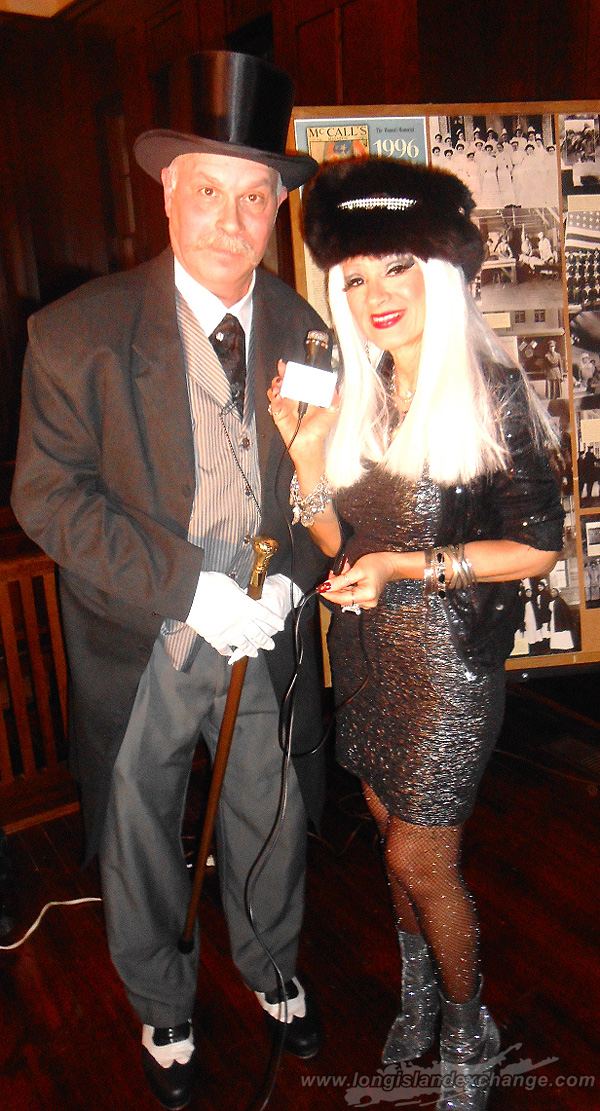 Tell my audience about the struggle that you have had getting this established into a museum.

Brian: The first thing we had to do was apply to the New York State Department of Education because museums are charted by the New York State Department of Education. We applied for that in 1997 and we became a chartered museum in 1998. At that time we knew we wanted to be a museum. We started to raise money, we started to raise funds. We did small shows in City Hall and at the library and we raised funds to get this court house back and we raised over one million dollars for the museum in that period of time. That’s seventeen years. We restored this building. This building at the time was in terrible shape. It had been used for satellite court house in the town of Oyster Bay. It was built in 1907 when Teddy Roosevelt was President of the United States.

Brian: It was a very cool time to be here because the Pratt family was here and Teddy Roosevelt lived in Oyster Bay. There were a lot of wealthy people here. J.P. Morgan lived here. Woolworth lived here. People came out here by steam boat. They came out here at that time for vacations. It was like the Hamptons.

I know. Isn’t that something how history has changed. Now everyone goes to the Hamptons instead of the Gold Coast.

Brian: Well they have cars now or planes and helicopters but back then they did a lot of travel by steam ship because they all didn’t have cars and there were not enough roads. This was started by Oyster Bay. They built the building as a satellite court house as I said and then Glen Cove became the city and broke away from the town of Oyster Bay in 1917. The town of Oyster Bay gave this building to the city of Glen Cove for its first government.

I see you have a lot of exhibits. How many exhibits do you have here as we speak?

Brian: We have some permanent exhibits which are always on disiplay and then we rotate other exhibits. The big rotation is World War I. We are ending that exhibit right now.

Brian Mercadante will be stepping down and the new president, Georgie Connet, will be taking reign on February 1, 2015. The North Shore Historical Museum has been chartered by the New York State Department of Education to collect and exhibit artifacts and archives of Long Island’s North Shore. For more information please visit www.northshorehistoricalmuseum.org 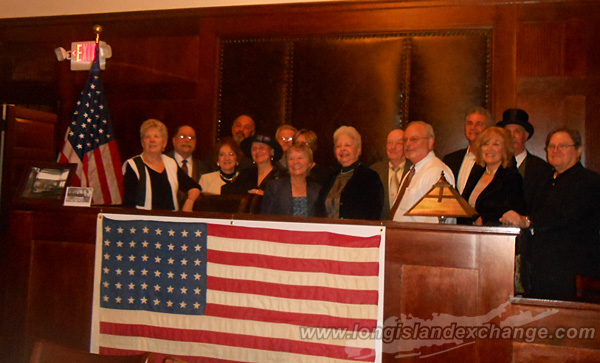