(Long Island, N.Y.) Grammy award nominees Brady Rymer and The Little Band That Could will be playing a free family concert at Buckley Day Camp in Roslyn on Saturday, November 9 at 10:30am.

The energetic, rocking music is infectious and appeals to kids of all ages, Rymer said.

Rymer, who lives in Southold, has been writing children’s music ever since his son Gus was born in 1996.

“My son was the initial inspiration,” he said. “I wanted to write for him, about him and about the family.” 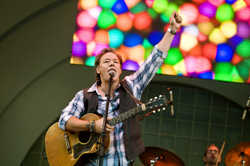 Prior to becoming a children’s musician Rymer played in a band called “From Good Homes,” which recorded with RCA records and shared the stage with the likes of Bob Dylan, Dave Matthews and the Grateful Dead’s Bob Weir.

“The band started dissolving at the same time I was starting a family,” Rymer said. “I started writing songs for Gus. I volunteered at his pre-school because they didn’t have a music program. The next thing you know I’m a children’s musician.”

As a gift to Gus, Rymer made a CD called “Good Morning Gus,” filled with the songs he wrote for him.

“People said that’s a great kids CD why don’t you press it up, and that’s how it all began,” Rymer said. “I realized when Daisy was born that if she didn’t get songs that would be a problem.”

“I was off the road and at home more,” Rymer said. “I was writing songs about that experience through the eyes of my kids. It was a magical time.”

Rymer takes typical experiences with his kids and turns them into relatable songs.

“I wrote a song called ‘Look at my Belly.'” Rymer said. “Gus was about one and a half. He was at the stage where he was running around and becoming self-aware. We went out for a Mexican bean delight dinner – the kind where your stomach becomes distended. We got home and he ran up to the mirror and lifted up his shirt and said, ‘Look at me!’ He was really proud of himself.” 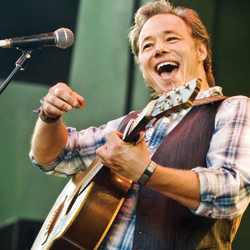 “Having kids was a brand new experience,” Rymer said. “You can write about anything as long as it’s true to you. You can’t just be silly. It’s got to come from a place that matters. From the heart. If it’s fun, creative, catchy and has good energy kids will enjoy it.”

“For example, when Daisy was in kindergarten she was eating animal crackers. She was enjoying biting the heads off the giraffe and the other animals,” he said. “I wrote a song called ‘Animal Crackers.’ It was playful, imaginative and it came from the heart in a sweet kind of way.”

“It’s exciting,” he said. “It puts a smile on your face. It’s a really engaged audience. You come off the stage really happy.”

Writing music is a family affair.

“When the kids were little we would all write the songs,” Rymer said. “In the same way other people would paint or build things with their kids, we would write songs.”

Rymer and The Little Band That Could are featured on an album called “Songs for a Healthier America,” which was sponsored by Hip Hop Public Health and Partners for a Healthier America. The proceeds for the album go to helping kids exercise and learn healthier eating habits. It’s a part of Michelle Obama’s “Let’s Move” campaign.

Other artists on the album include Jordin Sparks, DMC of Run DMC, Ashanti and Doug E. Fresh.

Rymer is looking forward to the concert at Buckley Day Camp.

“The show will include lots of singing and dancing!” he said.

Tickets are free but reservations are required and can be reserved at www.buckleycamp.com or by phone at 516-365-7760.