(Long Island, NY) The Hamptons International Film Festival celebrated its 22nd year in the Hamptons from October 9th through October 13, 2014. Each year the festival screens films from around the world. Below are some notable films that I attended red carpet premieres:

ST. VINCENT directed by Theodore Melfi starring Bill Murray was the opening night film at Guild Hall in East Hampton on Thursday, October 9. In ST. VINCENT, Maggie (Melissa McCarthy), a single mother, moves into a new home in Brooklyn with her 12-year-old son, Oliver (Jaeden Lieberher). Forced to work long hours, she has no choice but to leave Oliver in the care of their new neighbor, Vincent (Bill Murray), a retired curmudgeon with a penchant for alcohol and gambling. Together with Daka (Naomi Watts), a pregnant stripper, Vincent brings Oliver along on his daily routine: the racetrack, a strip club, and the local dive bar. An odd friendship soon blossoms between the improbable pair in Theodore Melfi’s charming comedy.

Patricia Clarkson attended the Festival on behalf of the Spotlight film, LEARNING TO DRIVE, which marked its US premiere at The 22nd Hamptons International Film Festival. Actress Patricia Clarkson also took part in “A Conversation With…” on Friday, October 10 at Bay Street in Sag Harbor. No matter the role, Clarkson brings intelligence, dedication, and her unique sense of empathy. A graduate of the Yale School of Drama, she worked on Broadway before making the leap to feature films with 1987’s THE UNTOUCHABLES. After successful stints on television, she achieved breakthrough status with 1998’s HIGH ART, where she earned an Independent Spirit Award nomination for Best Supporting Female. From there, she earned raves for her terrific turns in THE GREEN MILE, FAR FROM HEAVEN, HBO’S SIX FEET UNDER (two Emmy Awards), DOGVILLE, THE STATION AGENT, ALL THE REAL GIRLS, GOOD NIGHT, AND GOOD LUCK, LARS AND THE REAL GIRL, CAIRO TIME, and EASY A. In 2003 she earned an Academy Award® nomination for her work in PIECES OF APRIL. Clarkson joins the previously announced Hilary Swank, Mark Ruffalo, Laura Dern and Joel Schumacher who are also participating in “A Conversation With..,” making 2014 the program’s most robust year ever.

The film GETT: THE TRIAL OF VIVIANE AMSALEM directed by Shlomi Elkabetz premiered at the festival on October 11, 2014 at the Sag Harbor Cinema.

The film is a final piece of the trilogy by Israeli siblings Ronit and Shlomi Elkabetz exploring the unfolding of a marriage under the jurisdiction of a rabbinical court. Under this law, Jewish marriage may only end if the husband presents a “gett”, a divorce document, to his wife. Calling attention to a male-dominated and sometimes decade-long process, and set entirely in the courtroom, this brilliantly written and acted film reveals the slow dissolution of a marriage between Vivane (Ronit Elkabetz) and Elisha (Simon Abkarian). Balancing the seriousness of what’s at stake with an often-humorous tone, GETT offers a deeply moving take on an otherwise painful procedure.

I had a chance to interview the Director and Cast, Ella Purnell and Bruce Greenwood.

The film is a lovely trek into the stunning Alaskan wilderness, WILDLIKE follows fifteen year old Mackenzie on her first destination to the last frontier. When her stay with ‘Uncle’ takes a traumatic twist, Mackenzie must embark on a dangerous journey through the wilds alone. On her way she encounters another lone traveler (Bruce Greenwood, THIRTEEN DAYS) and together they offer one another something that cannot be found on any map: a chance at salvation. Starring Ella Purnell (MALEFICENT), Ann Dowd (TRUE DETECTIVE) and Brian Geraghty (THE HURT LOCKER), WILDLIKE is a thrilling and taut emotional film.

TIME OUT OF MIND produced by Richard Gere and directed by Oren Moverman premiered on October 10, 2014 at Guild Hall in East Hampton.

The film involves George Hammond who wakes up one morning in a random disarray apartment and is evicted by the building manager. He has a weeks-old beard and unexplained scratches on his face. With no where to go and without a dwelling He wanders the streets of New York looking for shelter and food. Filmmaker Oren Moverman (THE MESSENGER) and star Richard Gere, in a moving performance, bring many heartbreaking truths from this initial premise in TIME OUT OF MIND, a blistering and deeply affecting slice of modern day neo-realism.

THE HOMESMAN is based on the novel by Pulitzer Prize nominee Glendon Swarthout and follows the pious, independent-minded Mary Bee Cuddy (Hilary Swank) as she travels with three “damaged” women by covered wagon to Iowa across the American frontier. She soon realizes just how daunting the journey will be and employs a feisty low-life drifter, George Biggs (Jones), to accompany her. The unlikely caravan decide to travel east, where a waiting minister and his wife (Meryl Streep) have offered to take the women in. But the group first must traverse the harsh Nebraska Territories, marked by stark beauty, psychological peril and constant threatening conditions. 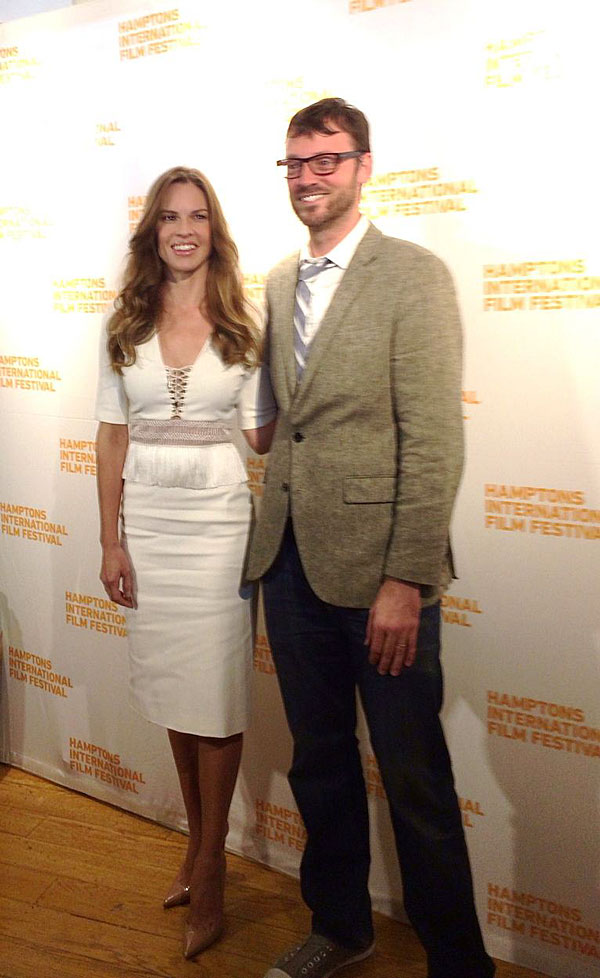 With the Academy Award-nominated features MONEYBALL and CAPOTE, Director Bennett Miller has the capacity of turning real-life tales into powerful dramas. With FOXCATCHER, he delivers his most stunning and unsettling film yet. Based on true events, the film depicts Olympic Gold Medal-winning wrestler Mark Schultz (Channing Tatum) and his revered sibling Dave (Mark Ruffalo) as they fall into the orbit of an eccentric multi-millionaire, John du Pont (Steve Carell). Their ambiguous goal is to launch Mark to fame and glory. Nothing quite prepares the audience for FOXCATCHER, as this riveting stranger-than-fiction story turns dark and tragic at the end.

Weenie is a grounded sixteen year old teenager who wants to go a forbidden party. The audience is fascinated with the character and the obstacles she goes through defying her mother’s wishes.

Director Dan Roe is a graduate of the School of the Art Institute of Chicago and teaches the 11th grade Media Studies course at Ross School, an experimental boarding school in East Hampton, New York. He is also a cartoonist.

The Hamptons International Film Festival (HIFF) is a year-round 501(c)3 non-profit organization with events, screenings, film workshops, comprehensive summer programs and an annual film festival each October. The Festival is the premiere film event on New York State’s east end, and is an intimate showcase of some of the year’s best offerings in contemporary cinema from around the world. With cash and in-kind prizes handed out totaling more than $190,000, HIFF continues to attract some of the best films of the year. Selections from all of our programs continue to play an important role during awards season. 2013 marked the 5th time in the last 6 years that a film at the Festival has become the eventual Best Picture winner at the Oscars, making HIFF the only Festival on the East Coast with such a distinction. In those 6 years, films screened in the festival have received 150 Oscar nominations.