Matinecock is an incorporated village located in Nassau County, Long Island, New York. It is within the Town of Oyster Bay. 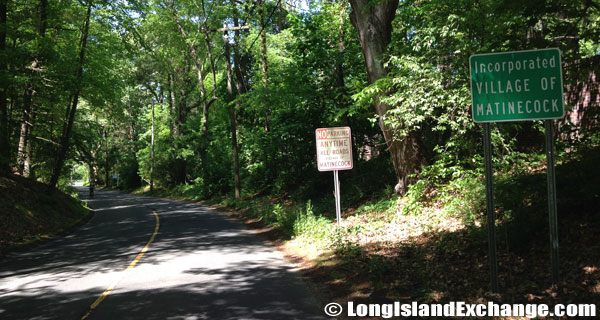 A sign welcomes visitors and residents to Matinecock, an incorporated village on the North Shore of Long Island. 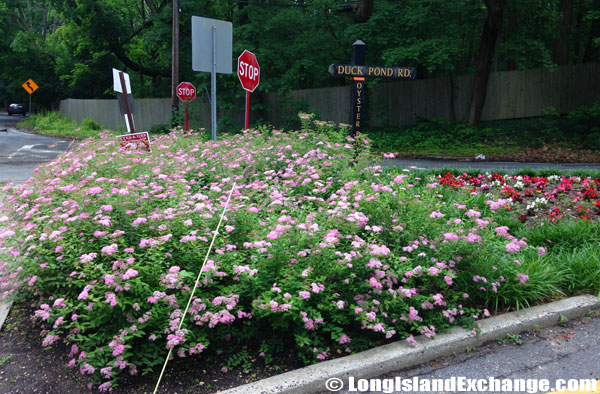 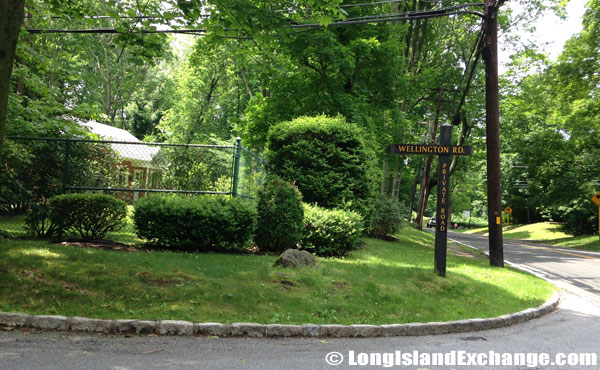 A water tower and small office at the intersection of Duck Pond Road and Wellington Road.

The neighborhood was taken its name from an Indian term for “hill country” because of the gentle rolling hills that overlooks in the Long Island Sound. In the mid-1600s, English and Dutch farmers began deracinating the Matinecock Indians. As the European settlement took place, the area became prominent for acceptance of the then-controversial Quaker religion. At the turn of this century, the New Yorkers began buying several acres of land in northern Nassau for Gold Coast estates. 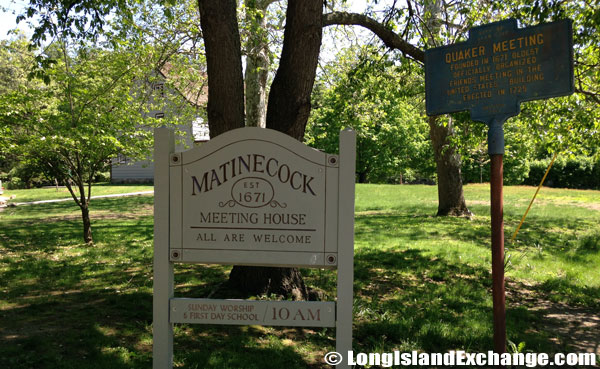 Quaker Meeting House across from the Matincock Friends Burying Ground. 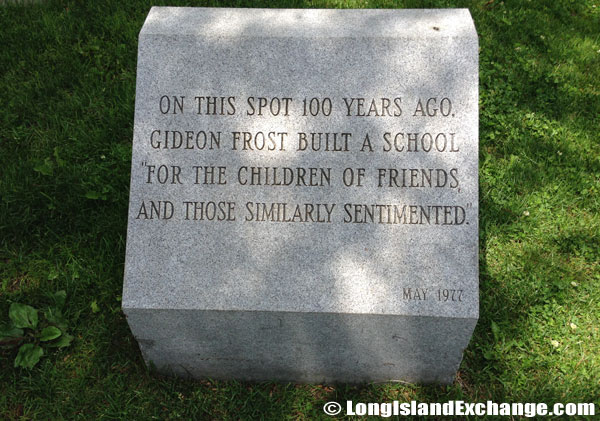 The Friends school was founded in 1876 by Gideon Frost, then 78 years of age for, in his own words, The children of Friends and those similarly sentimented. 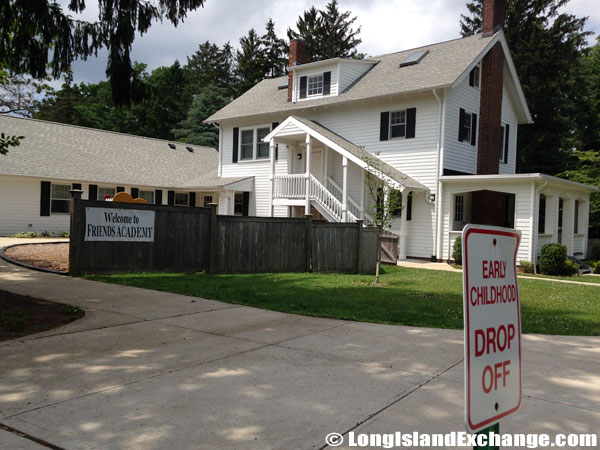 There were about a dozen little incorporated villages being established to gain local control of development in the late 1920s. Matinecock became an incorporated village on April 2, 1928. In fact, Worth Magazine ranked Matinecock as the fifth richest town in America and the richest town in New York in May 1998. The neighborhood had been ranked no. 1 nationally in terms of their home prices based on the home sales in 1995 and 1996 respectively. 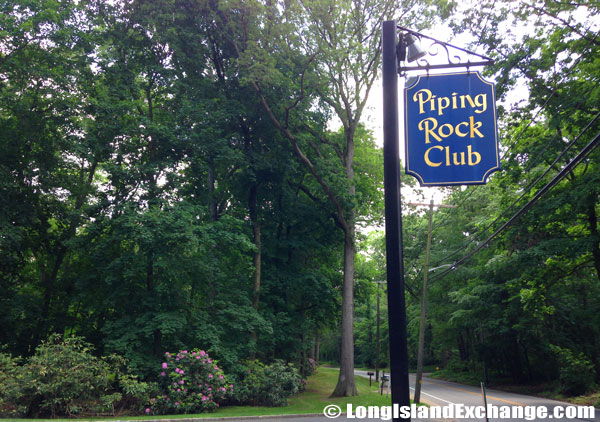 Piping Rock is a members only 18-hole links-style private golf and country club with strict rules, dress codes and prohibits cell phone use on Club Grounds. 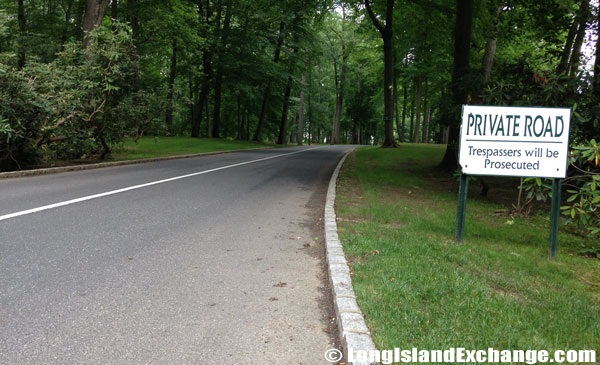 A private road leads into the Piping Rock Country Club 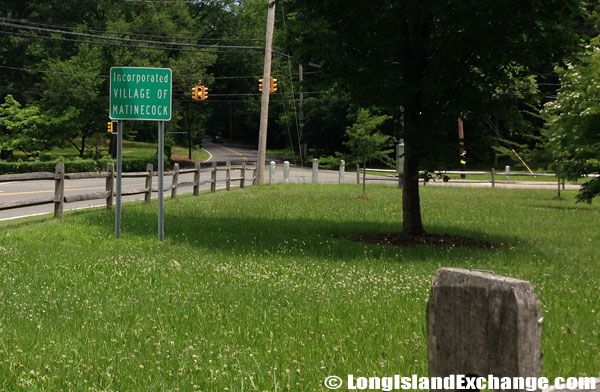 A sign across from the old Quaker house and Matinecock Cemetery welcomes visitors and residents to Matinecock.

The racial-makeup of Matinecock comprises of 96.05% White, 1.08% African American, 1.56% Asian, and 1.32% from two or more races. Most of its resident’s ancestries were English, Italian, Irish, German, Polish, Scottish, Russian, French, and Dutch. Matinecock is served by the Locust Valley Central School which also includes neighboring communities of Bayville, Mill Neck, Brookville, Lattingtown, and Locus Valley. The district is strictly providing academic excellence, developing in student’s autonomy, accountability and commitment to society, complemented by the many historical, educational, cultural, scientific, and business resources along the area. Many adults in Matinecock have attained college degrees than have people in most other villages in New York. 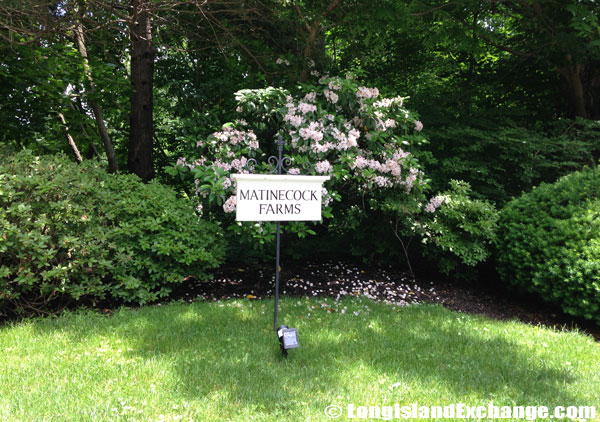 Matinecock Farms is a community of well to do homes with Homeowner’s Association Dues. The median home value in Matinecock, NY is $1,114,900. 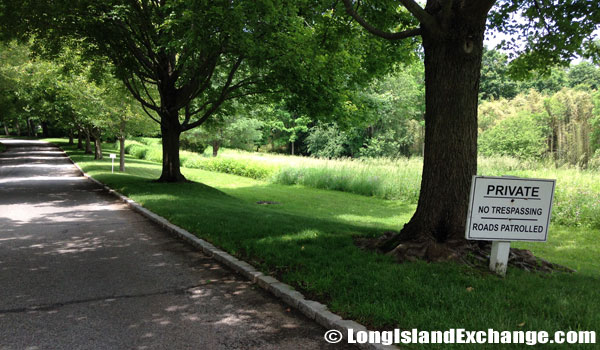 The majority of Matinecock is made up of gated homes, horse farms and prestigious private streets. 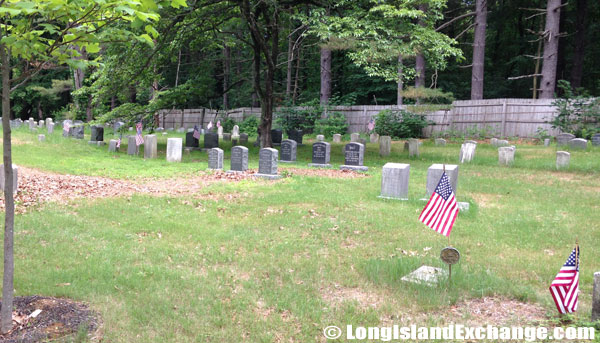 Matinecock also has wide range of places to shop, fine restaurants, and attractions to explore. The Outback Steakhouse has a branch here that serves the freshest, highest-quality food possible. In addition, the village is home to the legendary Piping Rock Club which features an 18-hole golf course that has 6,723 yards from the longest tees for a par of 71. The course rating is 73 and it has a slope rating of 134. The club is known for hosting several events attended by heads of state, world royalty and entertainment, and sports figures.