On Sunday April 17, 2016 the community of Huntington gathered at the Walt Whitman Birthplace for a presentation of Democratic Vistas, Multicultural Voices for the Favorite Poem Project. The Favorite Poem Project was founded by Robert Pinsky after the Library of Congress appointed him US Poet Laureate in 1997. Pinsky put out a nationwide call for Americans to send in their favorite poems. He believed that, contrary to stereotype, Americans from all walks of life do read poetry and particular poems have profound, personal meanings for individuals.

Pinksy’s project ignited a fire that spread the country with communities holding their own Favorite Poem readings. The Library of Congress videotaped for their archives 50 individuals reading their favorite poems. Walt Whitman Birthplace Association was very excited to offer their very own Favorite Poem Project. Robert Pinsky is serving as their 2016 Poet in Residence appearing at the Walt Whitman Birthplace on June 4, 2016.

The Favorite Poem Project – Multicultural Voices is part of the Walt Whitman’s Birthplace Associations 2016 program series. Democratic Vistas: Voices of Democracy is sponsored by the NY Council for the Humanities. 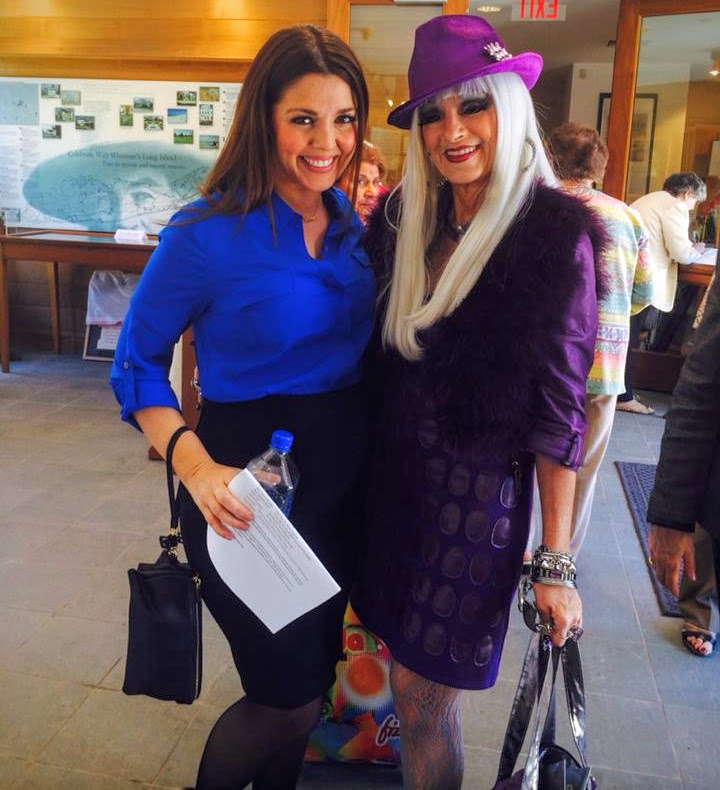 Entertainment Journalist Elisa DiStefano served as Emcee for the event. Elisa DiStefano is versatile host and seasoned award winning featured reporter. With over a decade of experience in live and breaking news, Elisa reports regularly on the red carpet and at celebrity events featuring A-list talent. She covers the Hamptons Summer scene extensively with access to exclusive events. Elisa was voted Best Local TV reporter by the Long Island Press several years running. She has been honored for her work on her weekly animal adoption segment and was also named Humanitarian of the Year by the American Cancer Society. Elisa enjoys volunteering her time to help a variety of causes and hosts many charity events including her own Sneakers and Sandals Beach Ball benefiting local organizations. Ms. DiStefano is a graduate of Boston University College of Communications and Delta Gamma alumni.

Not only did I interview Elisa Di Stefano but I also talked to Executive Director Cynthia Shor of the Walt Whitman Birthplace Association about the meaning and importance of Poetry.

Cognac: Welcome back darlings, I am Cognac Wellerlane and I am here at the Walt Whitman Birthplace a very historical place right here in Huntington, Long Island and I am here with this lovely lady who coordinated this wonderful event today. It’s all about poems. Introduce yourself to the camera darling.

Cynthia: Hi, I am Cynthia Shor, Executive Director of Walt Whitman Birthplace Association and we operate the site for New York State.

Tell my audience about this event this afternoon. What is it really all about?

Cynthia: It’s really all about individuals and everyone has a favorite poem. They may not be poetry lovers but they have just one poem in their heart. This is an example of an event to get those people to share that poetry.

Now I love poetry and I know many wonderful poems but there are a lot of people out there that really do not understand what a poem is. Most people think poems are writings that rhyme but there are some poems that do not rhyme. Can you tell my audience what distinguishes a piece of writing that does not rhyme that becomes a poem.

Cynthia: Well, it’s all about the language. So the language… if it doesn’t rhyme then it has to have other beauty and the beauty can be in the rhythm, it can be in the repetition of the sounds, the repetition of the initial letter and that is what adds the beauty to it. Sometimes there are internal rhymes. So there might be two words next to each other but they don’t rhyme at the end of the line, and so that is the technical skillful part of poetry, and then the other part of poetry like any art is inspiration. So the writer or poet must take the inspiration and channel it through the words using the skills that they can and leave it up to the community of readers to see if it is poetry or not but it doesn’t have to rhyme.

Absolutely and that is why I wanted to speak to you because many people are confused about what a poem should be. Tell my audience briefly about the history behind the Walt Whitman Birthplace. 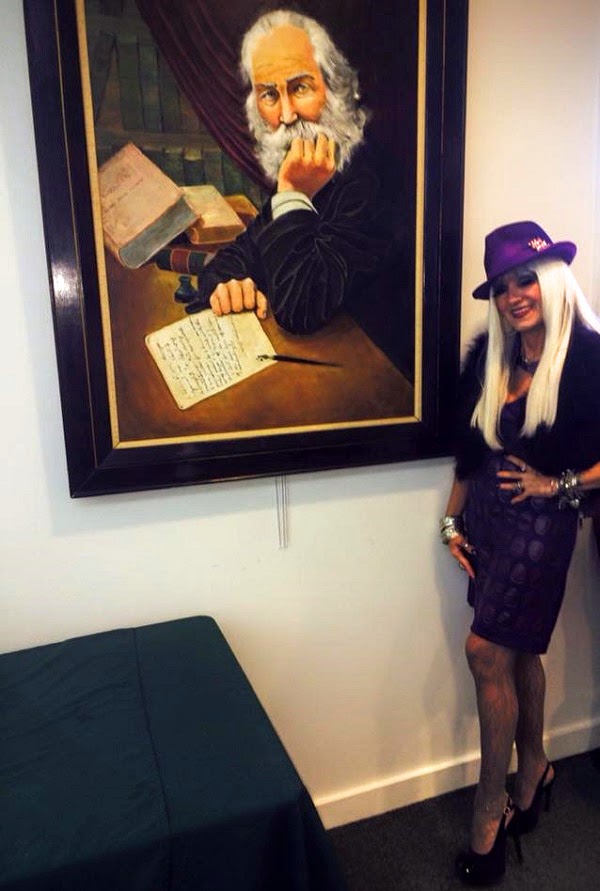 Cognac Stands next to a portrait of Poet Walt Whitman.

Cynthia: Walt Whitman was born here in this house on this site. The house was built by his father and he was born in 1819 and he lived here until he was four. Being a builder, the elder Whitman–his name was also Walter Whitman–moved the family to Brooklyn where there were new houses going up and he went to Brooklyn and he flipped houses. He was one of the original flippers and Walter grew up in Brooklyn until age eleven and then he went to school–that was the age of compulsory education–and then he went to work. He went to work for a journalist where he furthered his education and the journalist bought him a library card because at that time they weren’t free. It was a public library. So with the library card, called a subscription, like you would join a country club you had to join the library system; he became self educated much like Abraham Lincoln.

Cynthia: He grew up then and worked for the newspaper and he also went to work for a law firm and being a scribe as an office boy he learned language, he learned law, he learned about ethics, he learned about history and this was at the tender age of eleven, twelve and thirteen. By fourteen and fifteen he was back on Long Island and he became a teacher. He would live in the homes of Long Island and worked as a teacher. He started the newspaper “The Long Islander” which is still in print today and then he began writing a political track. He was actually a journalist before he was a poet.

That’s wonderful thank you so much for telling my audience some of the history of this remarkable place. Can you tell my audience where we can go to learn more information. what is the website? 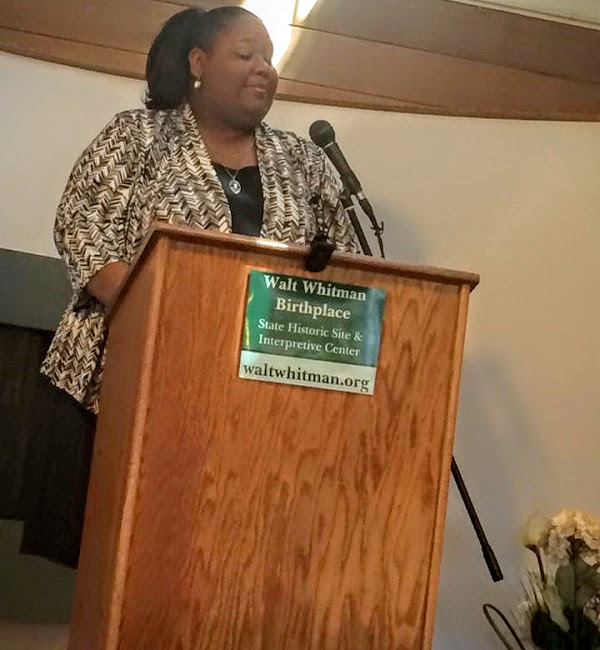 In 1819, Walt Whitman was born in a farmhouse in West Hills built by his father circa 1810. The Birthplace was restored in 2001 and it is a fine example of native Long Island craftsmanship. The Birthplace is the only NYS Historic Site on Long Island listed on the National Register of Historic Places. In 1998, the White House Millennium Council named it an “American Treasure.” In 2007, the Walt Whitman Trail, which begins at the Birthplace, was designated a National Recreational Trail by the US Dept. of the Interior.

Whitman’s collection of poems, Leaves of Grass, stands among the masterpieces of world literature. Scholars have name Whitman the “Poet of Democracy” and “America’s Shakespeare.”