PATCHOGUE, NY – This past Saturday October 24, 2015 art enthusiasts attended the New York Contemporary Arts Symposium (NYCAS). NYCAS is a program of the Islip Art Museum and is conducted in collaboration with D. Fleiss East West Artists.

NYCAS brings artists and art professionals from around the world together to form new networks, foster international connections, develop cross-cultural understanding and cultivate cooperation. The 2015 symposium provides nine international and three national artists with housing, studio space, all meals, trips to cultural centers and selected artist supplies at no cost. Lifting these financial burdens frees the artists to explore their creativity with themselves and the surrounding community through a series of public events arranged by the Islip Art Museum in East Islip and the Patchogue Arts Council in Patchogue.

I had the chance to talk to many artists including Dave Rogers who displays his art periodically at Art Space located at 20 Terry Street in Patchogue. 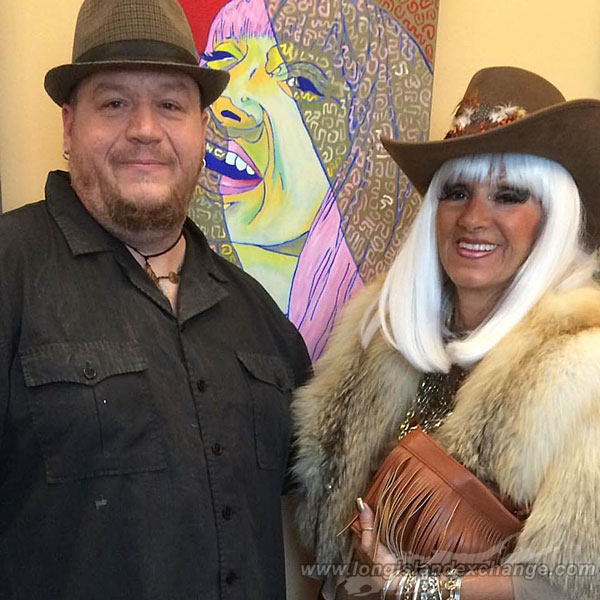 Rogers is a 14 year veteran of the US Army and served in Iraq (1990-91), Bosnia (1997). He was a first responder at the World Trade Center (2001) and homeland security in New York (2002-2004). Mr. Rogers is a New York based Neo-POP sculptor, painter, installation artist and independent curator. He has shown his work nationally in such areas as NY, Miami, NJ and CT. He has traveled the world and has internationally shown in such countries as China, Korea, Germany, England, France, Mongolia, Switzerland and Spain. His works are in several private and public collections, as well as having been displayed in Museums, National Libraries, Universities and Cultural Centers.

Mr. Rogers art work has also been displayed in several art fairs including Miami Basel, Toronto Love Art Fair and the Korea and Hong Kong Affordable Art Fairs. Rogers belongs to The Guild of American paper cutters, the Art and Oil Painting Associations of Jiangmen China, The Huntington and Patchogue Arts Councils, and Studio Montclair, NJ. His work has been featured in Long Island, Miami, Chinese, Korean, Japanese and Dominican Republic newspapers and magazines as well as on News 12 and Fios1 Long Island, Miami TV, and Guangdong Television in China.

Artist Dave Rogers recently painted a portrait of me and we discussed his new projects as well.

I know the painting was inspired by me but could you tell me a little more about the colors and the graphic art that you incorporated into the painting.

Dave: Well for the new series that I am doing…..I am doing mostly well known but not like super famous people…

Dave: I know some very well known people who have inspired me, who have been very supportive of me and my art. So they inspire me also and so in doing my new work with these pieces. It’s a combination of my older style which is a Neo-POP site and a lit bit add to my impressionist period that I did many years ago and then the symbolism which is basically a mixture of Chinese, Egyptian and Aztec kind of writing that I put together. So in the paintings I am telling a story.

So there is a real language that you incorporated onto my image?

Dave: Yes. So it is a story that I am telling but it is an unreadable story. It is for the viewer to find the story for themselves through the motion of the symbols and the color. You will notice on the painting part of it is filled in completely and part of it is not filled in completely. I like that unfinished feel. I picked it up while living in Asia. They like to leave the canvas kind of unfinished, undone so then again the viewer has to fill in their own concept of how it would look if it was full.

Does the writing, symbolism mean anything?

Dave: It means something to me.

What does it mean?

Dave: No, no…that the secret to my pieces. I don’t want to give away the secret. I want each viewer to look at it and find their own feeling, their own meaning into the piece.

Rogers spent seven years as a professor of art and visiting lecturer in art and design through China before returning to New York. He worked as an instructor at two different art organizations on Long Island, as an art advisor and lecturer for emerging artists and young collectors. Rogers has won awards for his work several veteran organizations, and from several art organizations on Long Island and with the Disabled Peoples Union of China, the Art Association of Jiangmen, China and the Chinese Government. Rogers has done several artist in residence in China and New York to include St. Josephs College in Patchogue, He is also the winner of the O’Malley Grant in Fine Art from Long Island University. He received his BA in Visual Arts with Honors from SUNY Old Westbury. Mr. Rogers attended the Academy of Art University and received an MFA in Sculpture from Long Island University.

Since a resident of Artspace Patchogue, Rogers was gallery manager for July 2013-Aug 2014. Along with other artists he has created a mural in the Village Roe Alleyway that represents the growth of the Village of Patchogue and the best of Arts in the community with funding from Suffolk County, the Village of Patchogue and several local businesses. He has created a public sculpture for the Village of Patchogue Park with Funding from the Garden Club. Recently Rogers’ design was chosen for a designer crosswalk on Main St in the village of Patchogue (The first designer crosswalk of it’s kind on Long Island). Rogers belongs to the Patchogue Chamber as a Art Consultant, and is a Board Member of the Hecksher Museum of Art. Rogers is a regular fixture in the arts around Patchogue and Long Island, either exhibiting work, or curating exhibits which help emerging artists find opportunities to exhibit their works. He has not only curated exhibits at Artspace Patchogue, but has created exchange exhibits and opportunities with Long Island University, Art Studio in Sea Cliff, Artspace Connecticut, fotofoto Gallery, and Sparkboom.. When not working on his art, Rogers mentors emerging artists and often creates chances for artists to join him in events and meetings supporting the arts.

I also interviewed Artist Patricia Kelly who uniquely uses watercolors in her painting giving her art an almost storybook concept. 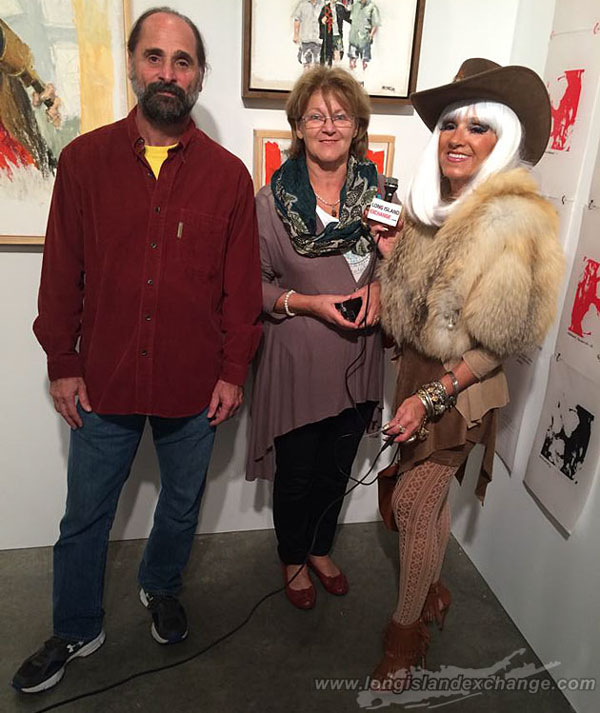 At the the New York Contemporary Arts Symposium (NYCAS) at Art Space I also talked to Curator and President John Cino of the Patchogue Arts Council. When a few folks met around a kitchen table to talk about how to cultivate the art scene in Patchogue, little did they know that they were to about to play an integral role in the cultural renaissance of their community.

The Patchogue Arts Council (PAC) provides artists of all mediums with opportunities to share their work, network with other creatives, and participate in arts advocacy initiatives. In addition to supporting a variety of artists and art forms, The Patchogue Arts Council also works to engage a diverse audience from all walks of life. By presenting a broad range of programs. Their mission is to hope to ignite the creative spirit of the Great South Bay.