Bailey Arboretum is open to the public seven days a week, year round. Community and educational programs are offered throughout the year. Bailey Arboretum provides visitors well marked trails, gardens and the freedom to stroll the beautiful grounds. The arboretum does not charge admission or parking fees to the community of Long Islanders and supporters. 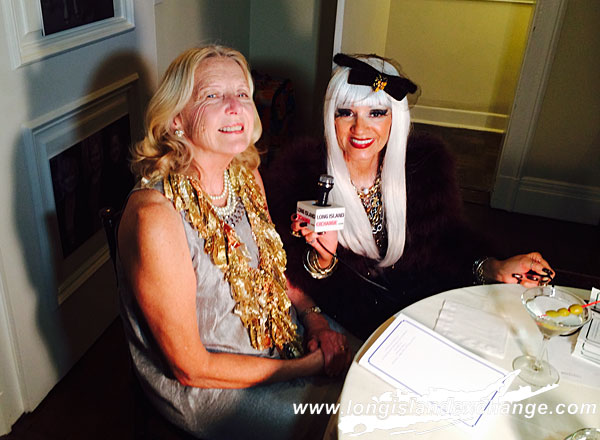 President Margaret Stacey explains the history of The Bailey Arboretum

During the cocktail reception I sat down with President Margaret Stacey who explained the history of The Bailey Arboretum.

Hello darlings. Welcome back I am Cognac Wellerlane and I am here with the President Margaret Stacey and she is going to tell us all about the history this fabulous place.

Margaret: Well an arboretum is a collection of exotic trees not everyday trees and Frank Bailey came from upstate New York. He was penniless when he came to Brooklyn after getting his degree in college and he started working at Guaranteed Trust Company as a clerk and he eventually became president of Guaranteed Trust Company and a multi multi millionaire. Sadly his first two wives passed away….his third wife said “I am getting out of Brooklyn,” so they came and they bought an estate and he really just wanted to make it a beautiful place. He wasn’t interested in building a castle or an “Oheka” or anything like that.

Yes there is so many of that here on the North Shore.

Margaret: He just wanted a nice family country home. He did double the size of the place but then he began to work on the gardens. He had succeeded in his career so now he was looking around for something to do. He wasn’t that interested in art or anything else…..no it was the trees. He had gotten involved with Homestead in Brooklyn in planting the parks in Brooklyn and so he used all those contacts to get trees here. He became so famous that when the Smithsonian got a tree from China or the Morton or Harvard or one of those places… he got one too.

Margaret: We have the largest Redwood tree in the world.

The largest? How tall is it?

Margaret: I am not quite sure.

But it is the largest?

Margaret: Yes we have girl scouts come. It takes twenty of them to make a circle around it. So it’s quite large. We have hundreds and hundreds of exotic trees….very famous trees.

From all over the world?

Margaret: Yes, from all over the world and they are still here. He came here in 1911 and he was still planting in the 50’s when he passed away and then it was given to Nassau County by the family and then the family kept a little bit in touch….more and more they handed it over to the county to run. The county said “Well you know let’s get a Friends Group going here, let’s get more volunteers.” In 1975 we started the Friends Group and that is where we are now. We have been self-supporting running this forty-two acres ourselves the whole time. The money we get here tonight will go towards it. We have a lot of education programs. We have trails in the woods. We have stroll gardens. We have a children’s habitat.

Yes I saw that.

Margaret: It’s very interactive for the little ones from pre-school mainly. We have a wonderful survivor program. The only one in the country. Rubbing the two sticks together thing….that you and I would never do….they think it’s great fun. It’s quite an amazing place all the things that go on. We just started an heirloom rose garden.

That must be beautiful in May and June when all the flowers are in bloom.

Margaret: We are working on a number of other gardens….a wild flower garden in the wooded areas. We are doing a native garden getting people to grow native Long Island things…even most of the things here are not. We continue to identify the trees here because they are so different and exotic that we have to bring in specialist from all over the country to tell us what to do do.

To keep them alive I would think.

Margaret: We lost a hundred trees during Sandy which compared to other places was not bad.

Yes that’s not really that bad since you have so many here.

Margaret: One of the things we are looking at is why were Frank Bailey’s trees were able to survive that storm?

Because you are lucky darling.

Margaret: Maybe that was it.

You have the luck of the Irish as they say and I think Mr. Bailey was Irish himself wasn’t he?

Margaret: I guess he was.

Margaret: He had to have been.

Yes you got the luck of the Irish.

Margaret: His family came down to see Bailey Arboretun this year. They came up and down. There in Palm Beach and up in Connecticut. They came back for a little reunion. They hadn’t been here in thirty years.

President Margaret Stacey talked more about the history of Bailey Arboretum and later revealed why she became involved. “My field has nothing to do with this. I happen to be a Professor of International Communications but I have always loved the outer doors. I was a great girl scout and my mother was a naturalist. I just love the outer doors so I learned all about it. When we moved here from Sands Point I immediately came to Bailey and starting poking around and when you volunteer the next thing you know they make you president. So that is how I got involved. I was just intrigued by the fact…and we were just another park and we looked into the history and said ‘there is something special here. We got to have a brand and we have to have something that makes us unique.’ We started looking into the trees and we had two professors from Cornell study them. They were absolutely astounded. We really didn’t know what we had. That was only four years ago that we uncovered this.” 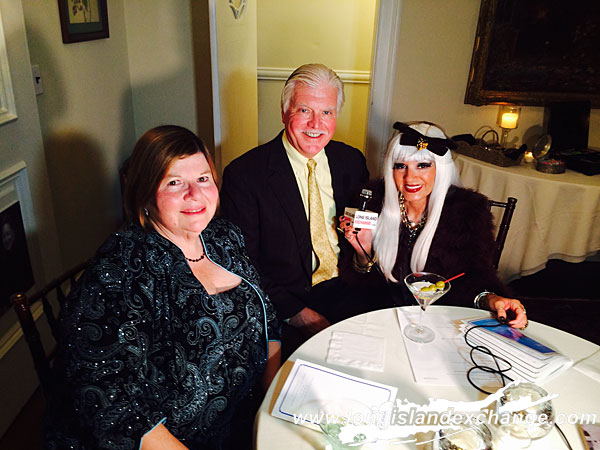 During the event Sue and Peter P. MacKinnon were honored for their generous donation time, expertise and talent to the continuation and enhancement of Bailey Arboretun.

Sue and Peter are exemplary friends in every way. Their generosity of time, expertise and talent reverberates in the Long Island community. Their passion for horticulture is legendary. Peter, being the son and nephew of Scottish estate superintendents has detailed familiarity with maintaining grand properties which has applied to his own gardens along with Sue’s meticulous direction. Their often toured gardens are soon to be part of the Smithsonian Archives.