LONG ISLAND, NY – Jess Ingui is a singer-song writer from Long Island New York. Last year she was a pre-cut contestant on The Voice, NBC and is now focusing on recording her first album.

Ms. Ingui grew up in Patchogue and later, out in Middle Island. She completed high school in Shirley/Mastic-Beach and worked out in Hampton Bays. I had a chance to interview this rising star and below is our interview:

Tell us what inspired you to become the singer and songwriter you are today.

Jess: Well, I have been singing since before I can remember; but as I got older it turned from a dream and hobby, into something that I really wanted to try and pursue as a career. I feel like music has something really wonderful about it that connects people unintentionally. Even without lyrics, people can put on a song and feel moved. That same energy that moved me created this desire to want to create something that others can relate to as well through my own past experiences and feelings. 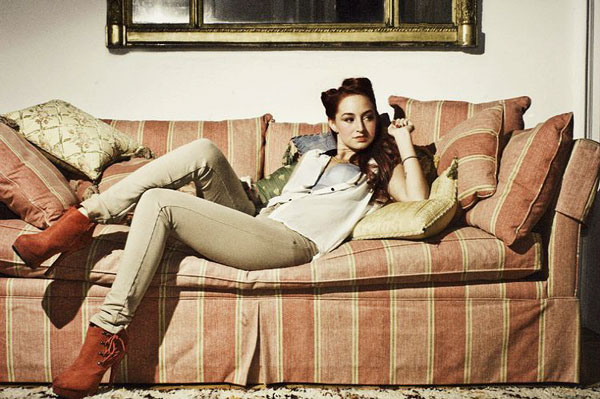 Jess Ingui, a singer-song writer from Long Island New York recorded produced, played, and sang her EP from her bedroom. She is raising funds on Kickstarter to complete her first solo album. Image via JessIngui.com; Photo credit: Eric Luc Photography.

Tell us about your previous projects that were recorded in your bedroom.

Jess: My last EP that I recorded was all produced, played, and sang in my bedroom. I collaborated with Josh Boorum, another local singer-songwriter, and we wrote a large collection of songs that we felt were a great reflection of us as individuals and as a duo. Because the drums and other important instruments were not recorded live, the quality isn’t of a stature that I feel is going to pull in a very large scale audience- however, the quality of the actual songs, lyrically and melodically, I think is proving to be able to do just that. I feel that a good song is a good song, whether listened to on a radio, a walk-e-talk-e, humming along to it- when you hear and feel a song that really connects with you, it doesn’t matter the quality of the overall recording. We are hoping that the songs released on that bedroom-recorded EP will drive enough support that, during the process of funding our first album, we will find success and be able to get into a real studio with all live musicians.

All of the songs on the EP are available for free download from www.soundcloud.com/jessingui

What goes into creating an album?

Jess: I used to feel that creating an album, from a singers perspective, meant learning the songs, getting into a booth, and trying to sing them with as much passion as you could muster. It took me years to realize that the concept of an album, as an artist, is so much more than that. It is creating a body of work that from start to finish, cohesively captures every sense. From the sound, the meaning, the visuals, the emotion… it’s everything. I have spent the last five years really absorbing the industry and the life lessons to be able to write material that I felt confident enough to stand behind. I think what it boils down to is, I have also spent the last five years really learning myself and growing into my skin and becoming comfortable with who I am as a person. When you become comfortable with who you are, and then allow yourself to create, the outcome is art. Creating a genuine and excellent album is everything- it’s the finished product of all the different aspects of art being pulled together.

In the music industry, who are your idols?

Jess: There are a lot of different people who have affected my perspectives musically and behind the scenes in the industry. Most importantly, other artists that have really moved me include Ella Fitzerald, Erykah Badu, John Mayer, Lauryn Hill, Josh Boorum, and my father. But I have also learned a lot from some really strong-minded, intelligent and hard-working music professionals such as Leyla Turkkan (Founder and CEO of The Catalyst Group) and le’Roy Benros (now president of Universal Music Group/Noizy Cricket!!).

Tell us about your experience as a pre-cut contestant on the NBC network show “The Voice”:

Jess: It’s funny, growing up as a singer-songwriter, when you tell someone what you do- that you are a singer- the most common response is, “Why don’t you audition for one of those shows!?” The perception today is that, in order to get recognized or to grow a following, you need some type of televised machine behind you in order to be successful.

I got very far, behind the scenes, on “The Voice” and it was a really educational and fun experience. However, these shows are equally as focused on talent as they are on type-casting. I may be a performer and a well-versed vocalist, but I would never consider myself a reality star. I feel that that is what those shows are really looking for: next generation reality stars. I’m just an average girl coming from some humble-beginnings who is very passionate about pursuing music as her dream! If anyone is considering auditioning for those shows, I say go for it! Follow your heart- there are many successful artists who got there break through the shows! I just don’t find that it is for me.

Tell us about how and why you are creating your first album and the online fundraiser you have established to create funds?

Jess: KickStarter is an online fundraiser where artists (musicians, actors, inventors) launch a well organized project in hopes that their friends, family and following will support them by donating. After spending a few weeks planning, financially, what it would take to create something that was professional and true to my artistry, we set a budget and put the project live. In the music industry, getting signed to a label allows you to have a source of funding. The label gives you money toward creating your art and getting it out to the world for you. KickStarter takes the concept of label from a corporation to in the hands of your friends and supporters.

If all the money is raised on the KickStarter, all of the proceeds will then be designated toward recording the full-length album. If the money is not raised, however, everyone keeps their money and my project sees none of it. It is an all or nothing campaign!

The songs and material written for this album are everything to me. They are a reflection of my every day feelings and experiences. I think all the songs are relatable and enjoyable. My music is soul/jazz/r&b inspired with a little bit of a pop flare. It’s kind and honest and has taken me years to perfect and feel confident in even speaking highly of.

If this KickStarter gets funded, not only would I be able to complete the album, but everyone would have contributed toward making my dream become a reality! I really believe in my team and with a little kick start I would love to repay everyone through song!

Tell my audience some of the industry professionals you are working with.

Jess: I don’t want to give too much information away, especially while the campaign is still below 50% funded- but I will say, that if you contribute, you can sign up to receive updates on the project. When I hit 50% funded, I am going to share some of the musicians and other industry related professionals that agreed to assist me in the project and the release of it as well!

I understand that your project is on Kickstarter. Can you tell us what the different pledges are?

Jess: So donating toward my KickStarter doesn’t leave you empty handed! Depending on different amounts you donate you get things in return. A copy of the completed album, invites to different events, tickets to shows- things like that!

If we want to learn more about how we can donate towards this project for your first album is there a website we can go to?

Jess: If you would like to learn more about me or connect with me on different social media platforms, you can go to my website at http://www.jessingui.com

For those who have never heard of it before, Kickstarter is a “crowdfunding platform” based through online support. The company’s mission is to help bring creative projects to life. According to Forbes, crowdfunding has “quickly moved from trendy buzzword to a mainstream fundraising model” with more than five million contributors pledging close to $1 billion, funding more than 55,000 projects.

Jess has an upcoming live show on February 19, 2015 at 89 North Music Venue in Patchogue. Supporting sets will include fellow soul, jazz and pop artists, Leah Laurenti and Cora Small. Doors will open at 7:00 PM with a $10.00 Cover. 18+ Presented by Planet of Sound Promotions.

Fix This performed by Jess Ingui off of her debut EP; YouTube.