The Queens-Midtown Tunnel, also shortened to the Midtown Tunnel, is a toll road that crosses under the East River and connects the boroughs of Queens with the Borough of Manhattan between East 34th Street and East 42nd Street in the Midtown area. The tunnel carries about 80,000 vehicles per day. It is part of Interstate 495 and serves as a westbound terminus for the Long Island Expressway. The Manhattan end is networked in a manner to optimally connect with the city’s grid. The edges of the tunnel on land bear almost no sign of the continuous flow of traffic below. Hunter’s Point at the Queen’s side has some apartments and warehouses, whereas the Manhattan end just has some greenery to cover the entrance and exit. 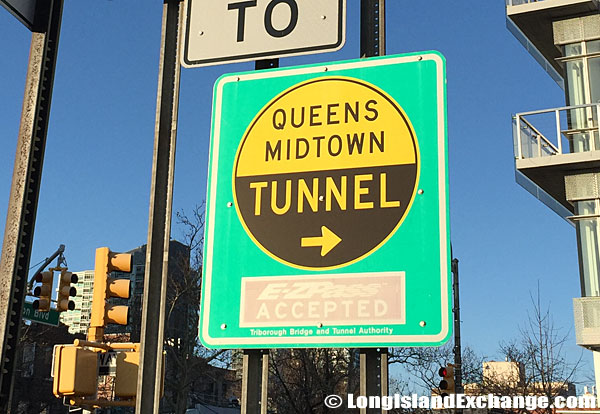 A sign at Jackson Avenue and 51st Avenue points towards the Queens-Midtown Tunnel Toll Plaza.

The tunnel was designed by Ole Singstad, and it was opened to traffic in 1940 under the supervision of New York City Tunnel Authority to relieve traffic congestion on the city’s East River bridges. It was among of the largest public works projects of the New Deal era, and represented the most advanced tunnel engineering techniques of its day. In 1946, the tunnel became a Triborough facility when the New York City Tunnel Authority and the Triborough Bridge Authority were consolidated to form the Triborough Bridge and Tunnel Authority. Singstad’s experience as chief engineer of the Holland Tunnel enabled him to meet the challenge of excavating the rocky, unusually difficult conditions under the East River. It consists of twin tubes carrying an aggregate of four traffic lanes, and is 6,414 feet long. The former US President Franklin Roosevelt was the first person able to drive through the completed tubes. The Midtown Tunnel has responded to Presidential involvement in its welfare by providing a high-capacity, all-weather and most reliable link between Manhattan and Queens for over 6 decades. 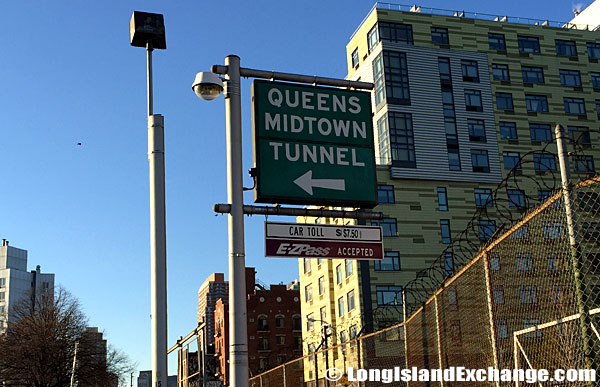 A sign outside the Bridge and Tunnel employee parking area points towards the Queens-Midtown Tunnel Toll Plaza.

It is natural that a construction of such dimensions, nature and intense use, will need major maintenance. A project has started in 1998 and seeks to strengthen the ceiling, provide better lighting, upgraded fire protection and related features. Much of this work has been completed. MTA Bridges and Tunnels began a six-year project at an approximate cost of $132 million for the Queens-Midtown Tunnel rehabilitation, the first such project in the history of the tunnel.

The Midtown Tunnel has a charge of $7.50 for a two-axle passenger vehicle in each direction. The crossing charge for a motorcycle is $3.00 charged in each direction. E-ZPass users are given a small discount. The tunnel is closed to traffic one night each spring to allow for the annual Ringling Bros. and Barnum & Bailey Circus Animal Walk. Several nights before the circus opens at Madison Square Garden, the elephants march into Manhattan and down 34th Street to the arena.