Long Island Expressway or the LIE, also designated the Interstate 495, runs for 70 miles entirely within New York State, starting at the Queens-Midtown Tunnel to end in Riverhead just before the “fish-tail” separation of the North and South Forks of eastern Long Island begins. It runs through the counties of Queens, Nassau and Suffolk. The LIE was constructed in stages starting in 1939 at the NYC end until 1992 when its Riverhead terminus was finished. 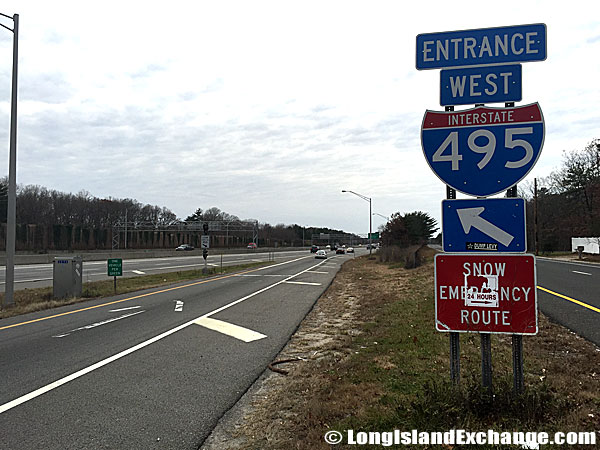 The first section of the Long Island Expressway, a one-mile-long, six-lane viaduct over Long Island City, Queens, opened to traffic in 1940. The new viaduct had its eastern terminus at the new Brooklyn-Queens Expressway (I-278) and its western terminus at the Queens-Midtown Tunnel. The viaduct rises 106 feet above Dutch Kills at its highest point. East of Queens Boulevard (NY 25) the LIE continued east along four-lane Horace Harding Boulevard (then NY 25D). The new expressway went over the route of Horace Harding and Nassau boulevards.

In October 1958, the first Long Island section of the LIE opened between in East Hills. The designation of Interstate highways in New York State began at the same time and the LIE received the I-495 designation from the Queens-Midtown Tunnel to the Clearview Expressway. East of the Clearview, the LIE remained NY 24. It is interesting that they could build the Long Island Expressway through Old Westbury. Twenty-five years earlier, the Northern State Parkway needed a detour, the “Objector’s Bend” to avoid the area. However, they could not construct interchanges for a four-mile stretch. 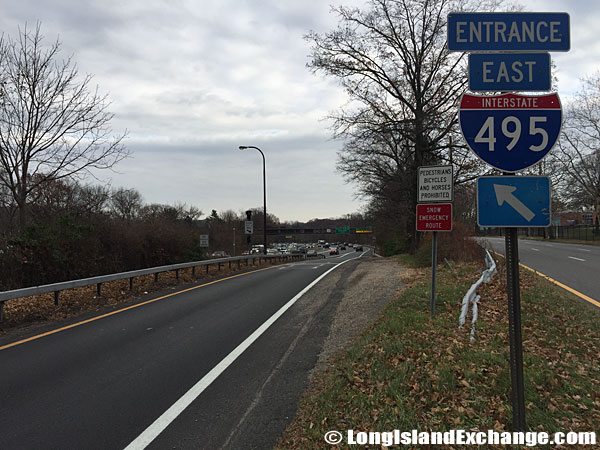 Slowly the Long Island Expressway made its way across Nassau and Suffolk counties through the sixties. In 1970, the Long Island Expressway was still 22 miles from its planned terminus. In spring that year, a 20-mile-long section of the expressway between Holbrook and Calverton was completed. In 1972, the final segment east to EXIT 73 was completed. Strangely, the first light posts were installed in western Nassau County and on the expressway only in 1980 and the lighting project continued through eastern Nassau and western Suffolk until 1982. In 1998, lights were extended east from EXIT 62 to EXIT 64. 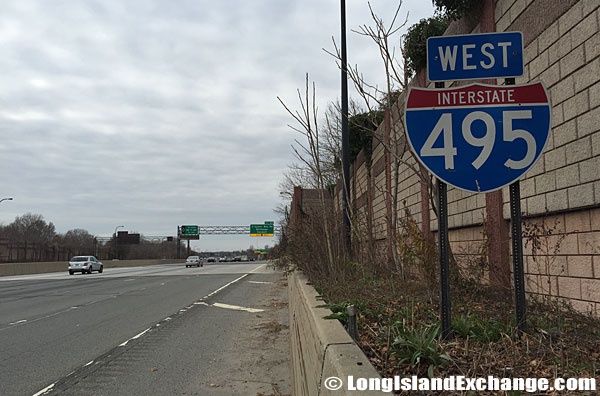 In 1994, an HOV lane in in each direction was added from Deer Park to Hicksville and by 2005, construction to extend the lane to the border of Queens and Nassau Counties was completed. This has to eased the traffic which has been the butt of many jokes about the I 495. One suggests that the acronym “LIE” is appropriate as with the traffic congestion the term “expressway” is a lie. A bumper sticker reads “I drive the LIE. Please pray for me.”. The LIE had often been termed the “World’s Longest Parking Lot”.

Long Island Expressway heading East where it ends in Riverhead

The oldest and tallest tree in the New York Metropolitan Area, called the Queens Giant is very close to the Long Island Expressway in Northeastern Queens, near the Douglaston Plaza Mall). If you know where to look, you can can see it in the distance for a few seconds while driving west on the LIE.