The Verrazano-Narrows Bridge is a double-decked suspension bridge that connects both Staten Island and Brooklyn to New York City at the Narrows, the reach connecting the relatively protected upper bay with the larger lower bay. In Brooklyn, the bridge connects to the Belt Parkway and the Brooklyn-Queens Expressway and to the largely residential community of Bay Ridge. 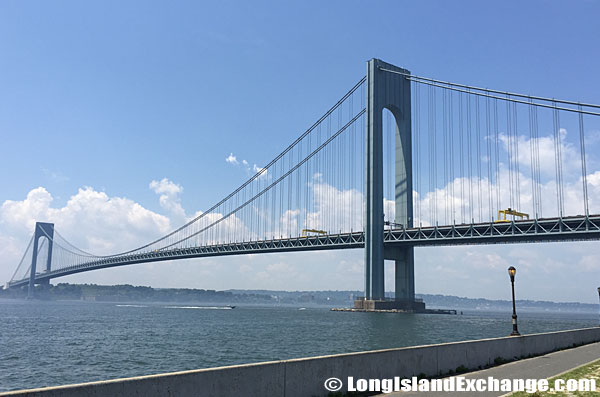 New York Bay by the Verrazano-Narrows Bridge from the side of the Belt Parkway eastbound.

On Staten Island, which saw hasty development after the bridge opened in 1964, it joins the Staten Island Expressway, providing access to the many communities in this most rural of the city’s five boroughs. The bridge is also a major link in the interstate highway system, providing the shortest route between the Middle Atlantic States and Long Island.

The Verrazano Narrows Bridge has a center span of 4,260 feet (1,298 m) and is known as the largest suspension bridge in the world at the time of its completion. According to the United States Department of Transportation, each of the bridges two towers contain 1,000,000 bolts and 3,000,000 rivets. Its monumental 693 foot high towers are 1 5/8 inches farther apart at their tops than at their bases because of its huge foot distance between them made it necessary to compensate for the earth’s curvature. The bridge has also astounding logistic importance.

The link between Brooklyn and Staten Island is taken for granted now, but those who had to commute without the bridge until it was opened, especially on harsh frozen and foggy days, breathe with gasps of relief every time the broad lanes between the spans speed them to their destinations. The ferry service that preceded the bridge was unreliable in winter.

The construction of the bridge began on August 13th, 1959, and was completed on November 21, 1964 with an approximation cost of $320 million. It was originally named for the Italian explorer Giovanni da Verrazano, the first known navigator to enter New York Harbor and the Hudson River, while crossing the Narrows. In fact, the naming of the bridge for him was highly controversial at the time. It was first proposed in 1951 by the Italian Historical Society of America, when the bridge was in the planning stages.

After the initial proposal was turned down by Moses, the society undertook a public relations campaign to both re-establish the reputation of the largely-forgotten Verrazano and to promote the idea of naming the bridge for him. Today, the bridge is already owned by New York City and operated by the Triborough Bridge and Tunnel Authority an affiliate agency of the Metropolitan Transportation Authority. The Verrazano, along with the other three major Staten Island bridges, created a new way for commuters and travelers to reach Brooklyn, Long Island, and Manhattan by car from New Jersey.

The Verrazano Narrows Bridge furnishes a critical link in the local and regional highway system. The famed New York Marathon starts in the vicinity of the bridge. It is also marks the gateway to New York Harbor; all cruise ships and most container ships arriving at the Port of New York and New Jersey must pass underneath the bridge. Most ships must be built to accommodate the clearance under the bridge. There are other five bridges have come up in Europe, China, and Japan with longer spans, but New Yorkers continue to keep the pride of place for the Verrazano Narrows in their hearts.