Davis Park is a hamlet on Fire Island located in Suffolk County, on the South Shore of Long Island, New York. It is within the Town of Brookhaven. The neighborhood includes the Ocean Ridge (eastern) and Leja Beach (center) sections. Davis Park, however, is often used to refer only to the western (original) section of the community. Davis Park is the generic term for the lot, a fact many in Ocean Ridge take some exception to despite its historical accuracy. Not separate communities, yet not fully integrated with one other, Davis Park-Ocean Ridge nonetheless willingly bears with its slightly hebephrenic self-image. 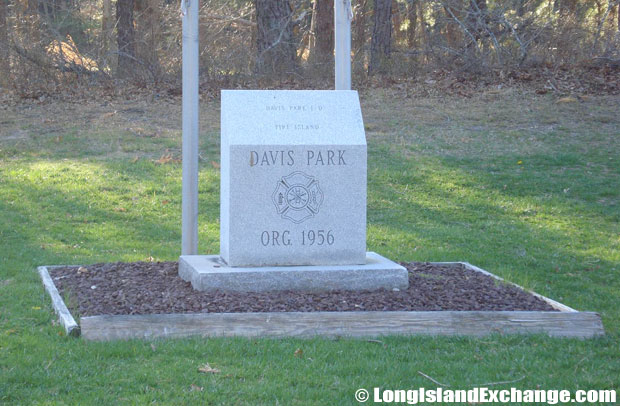 The three sections of the community are quite apparent from one another. Davis Park has thicker growth and more trees and shrubbery; Ocean Ridge, flatter, sandier, stretches away along a central boardwalk all open to view. Leja beach is the commercial district that includes stores, Casino, and small boatel all abut its solitary bay-to-ocean walk. The latitude of Davis Park is 40.683N. The longitude is -73.005W. It is in the Eastern Standard time zone. Elevation is 10 feet.

After World War II, much of the area in Davis Park was developed beginning with a town marina and park. It was taken its name from Davis brothers of Patchogue who purchased over the first houses and donated the Leja Beach strip to Brookhaven as a public beach. Then, the neighborhood rapidly became a haven for singles, who to this day have given the place its meticulous style and ambience. In 1950s, Davis Park proper filled with modern homes and stylish vacationers out to take advantage of Fire Island’s incomparable natural assets. Over the years, a post office and food store were also built. Today, Davis Park has approximately 550 homes, one general store, one restaurant, and one bar.

Davis Park was formerly the summer home of well-known composer David Amram. He is known as eclectic use of jazz, ethnic and folk music that has led him to work with the likes of Thelonious Monk, Willie Nelson, and Charles Mingus. The Marina at David Park is one of the famous tourist spots in town which boats are welcome from both Town residents and nonresidents, with fees based on a per-foot basis and residency. It has been enlarged over the years and can now accommodate 200 boats. The walk from the marina to the post office steps is line with beautiful plantings.

The Davis Park Ferry (seasonal, mid-March to end of November) offers service to Davis Park – Ocean Ridge from the Patchogue Fire Island Ferry terminal. The Davis Park Association represents the interests of homeowners and residents and sponsors an assortment of social and civic events, including an art show and Fourth of July costume parade. The association is responsible for the beautification of Davis Park which every member voluntarily give a hand to have a clean and green environment.