This hilarious adaption of Woody Allen’s creation takes place somewhere behind the early 1960s cold-war iron curtain. The Hollander family cause an international spying incident when Walter photographs a sunset in a sensitive region. In order to stay out of jail, the Hollanders take refuge in the American Embassy, which is temporarily being run by the absent Ambassador’s diplomatically incompetent son, Axel.

“Don’t Drink The Water,” is a delightful cascade of comedy and was a solid hit on Broadway. It’s not much of a refuge for the ambassador is absent and his son, now in charge, has been expelled from a dozen countries and the continent of Africa. Nevertheless, the Hollander family carefully and frantically plot their escape and the ambassador’s son and the caterer’s daughter even have time to fall in love. 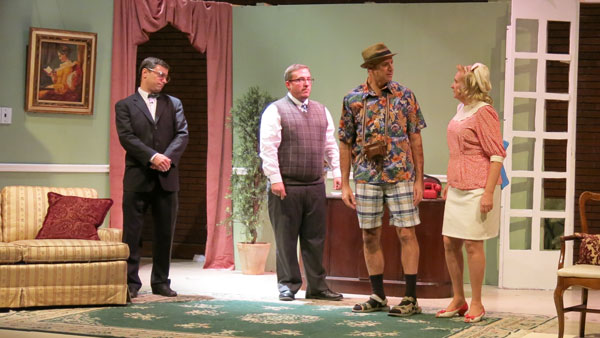 After the production I interviewed Star and Actress Helen Proimos who was thrilled to play the lead role of Marion Hollander. During our Interview Helen revealed,

You know, Cognac, you cannot do this alone. Part of my inspiration to build my character of Marion Hollander was drawn from my own marriage and life experiences. But fortunately, I also have the input and guidance of a wonderful director, Richard Buckley. He is very attentive to detail and I like that. Also, the Assistant Director, Peter Triolo, has lots of experience and is also the President of the Long Beach Theater Guild. He is honest in his critiquing which every actor needs. He is also the set designer/carpenter.

Nancy Sullivan and Lisa Simon- Weitz are co-producers. They oversee everything and are great at what they do. Nancy even helps me with my costume changes because they are very quick. Sometimes we have to double up costumes and just pull the top one off. Nancy’s mom, Ginny, does the sewing and Don is on tickets.Logan on lights and Rich on sound.

This is community theater and we all have to pitch in. I even helped paint the set with other castmates. The men move furniture and sometimes the women do too. There is lots of backstage helping hands like, Ellen, Linda, and Barbara. Even more in larger productions.

The whole cast pulls together and does the best job they can and I am fortunate to be working on “Don’t Drink The Water” with very talented people. My co-star, Steve Brustein – who plays Walter Hollander, a catering business owner, has wonderful timing which is essential for comedy. We really play well off of one another. It is easy to believe this is really happening when he says things like, “Marion, maybe we’ll make that our slogan” referring to my line “Thank God no one died” in response to our customers being poisoned accidentally by his substitute (Sam Blackwell back in NJ) while we are away on vacation because he always ‘buys cheap’.

Stephanie Judge, who plays my daughter, is perfect in her innocence. Tommy Larson as Axel Magee plays a bumbling Ambassador’s son complete with pratt falls to a ‘T’. Joe Anfora’s confidence as Ambassador Magee can make you shutter. Lloyd Baum as the Sultan of Bashir has the presence and look of a shiek. His real life wife, Lillian Baum, plays his on stage wife and is adorable. Jeff Gedacht as Krojak has a very convincing Russian accent and although comical, makes you fearful as his character should.

Pam Madison as the Chef is just too good and I told her she’s stealing the show. Aaron Meyer as Kilroy has a funny bit when he is struck in the head and thinks he is the Wright Brothers. His wife, Ily, does the program among other things. Charlene Senzon is elegant as the Countess and you don’t doubt that she is for a minute. She also is my saving grace backstage helping me into my next costume when she can. Father Drobney is played by a hysterical Jeff Stevens who has been hiding in the embassy for six years and has been perfecting his magic tricks in his room – a ‘tricky priest’. He is now thrilled to have an audience in the Hollanders. I do a scene with him where we actually roll on the floor in my attempt to free him from the straight jacket he is stuck in. The audience goes wild. Debby Wilson is Ms. Burns who is the administrator and keeps her on things including Axel Magee.

I am grateful to be working at LBTG again. Last year I played Nellie in “Some Like It Hot” and I knew that I wanted to return because everyone is so nice and professional at LBTG which is a perfect mix. I got that role because the year before that same show was stopped because of Hurricaine Sandy and they decided to pick it up again the next year and the actress that had that role was not available. I am so happy to play Marion Hollander as this is a substantial role and also was an on Broadway hit in the 1960’s written by Woody Allen,

Helen Proimos is a SAG/AFTRA actress, singer and performer. Helen enjoys working in the theater on stage and in films. Some of her latest theater credits include Mae Peterson in “Bye Bye Birdie,” Mrs. Strakosh in “Funny Girl” and now Marion Hollander in “Don’t Drink The Water” by Woody Allen. She has had roles in many award winning independent films. She was Anne Heche’s horseback riding stunt double on the soap, “Another World.” Helen performed with a doo-wop group opening for The Platters and other notables. Helen’s latest film was the lead role she had in the film “Taught To Hate.” The controversial film received many accolades and prestigious awards both nationally and internationally. Aside from festivals, this film has been shown and discussed in schools and communities to help stop hate crimes and bullying. Her new project is portraying a young Eddie’s mom in the 2015 staged musical of Two Tickets To Paradise starring recording artist, Eddie Money.

She also can be seen on her new TV show “Stage And In Between Screen With Helen” on Cablevision every Monday night in Nassau County on Channel 115 at 10 PM, Hauppauge/Brookhaven area – Fridays, Channel 20 at 6:30 PM and in Riverhead – Wednesdays, Channel 20 at 10 PM. 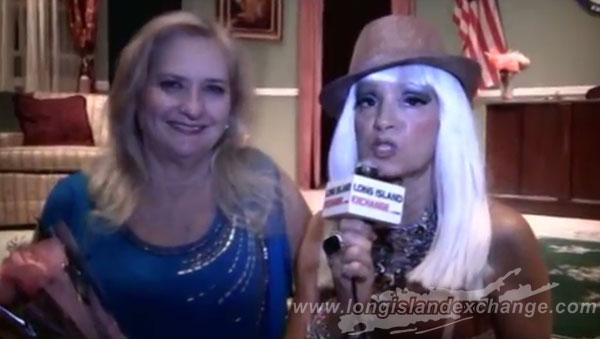 The Long Beach Theatre has been in continuous operation and they are proud to reflect on past productions. In addition to 36 musicals, Long Beach Theatre Guild has presented 64 comedies, dramas, straight plays and original works. Their past critically acclaimed presentations have been at the Point Lookout Rec Hall and Ye Olde Fire House as well as Lindell Auditorium in Long Beach. Their administrative office is in Point Lookout. Because of the large size of their audience, they have now “outgrown” these other venues and their productions will now been seen at Temple Emanu-el in Long Beach in cooperation with the Temple Sisterhood.

For a local community group, their record of presenting these productions is unmatched.