LONG ISLAND, NY – It was a roaring good time as supporters attended the The Roaring 20’s Summer Party for the Retreat in the Ross School Lower Campus Field House located at 739 Butter Lane, Bridgehampton, NY on Saturday June 20th, 2015. This year marks the 20th anniversary of “All Against Abuse” (previously Artists Against Abuse) annual summer party to benefit The Retreat Domestic Violence Services.

The Retreat’s mission is to provide safety, shelter and support for victims of domestic abuse and to break the cycle of family violence. A community-based, not-for-profit serving the North and South Forks of Long Island since 1987. Before the event got underway I spoke to Executive Director Loretta K. Davis.

Hello darlings, welcome back. I am Cognac Wellerlane and I am here at the 20th Anniversary for “All Against Abuse” I am here with the Executive Director of the Retreat and she is going to introduce herself to the camera.

Loretta: First of all it is a fabulous celebration. It started twenty years ago with “Artist Against Abuse” and at that time it was artist who were supporting the Retreat and they were making plates and platters..and it was only the plates and platters that were actually being sold raising money for the Retreat…that of course does services for domestic violence families. So now we still have three platters that we are offering tonight for sale by artist but look what it has blossomed into.

Well it looks like a spectacular event. It’s just beautiful…the way it is decorated! Tell my audience who did the decorations?

Loretta: It’s incredible. Now that you have to talk to Maggie about.

OK. I am going to talk to her about that. You have some pretty important sponsors. Tell my audience who those sponsors are?

Loretta: Well first of all we have an honorary committee and that is an amazing group of people that have been very supportive including Liev Schreiber is one of them. We have many, many more. I will let Maggie give you all the names on that.

If we want to find out more information about this charity, this fundraiser and everything regarding the Retreat…and against domestic violence, where can we go to support contribute and participate?

Loretta: We have a website it’s www.theretreatinc.org and if you go on there you can see all the services that we provide not just to women and children…it’s also men and it’s not just Suffolk County. We provide services to people that are in Nassau County…even out of state if they need shelter and it’s safer for them to be at our shelter then in other states. If you go on our website that’s the best place to get information.

Prior to joining The Retreat, Ms. Davis was the Town Justice in Tuxedo, New York for almost 20 years where she presided over civil and criminal matters. She worked as Moderator for the Roundtable which is the court of last resort for families recovering from Hurricane Sandy. The Roundtable is administered by the Health & Welfare Council of Long Island, a not-for-profit organization in Melville, New York.

Ms. Davis holds a law degree from New York Law School and completed her undergraduate degree at the University of Vermont. She clerked for a federal district court judge in Manhattan and worked at the law firm Cleary, Gottlieb, Steen & Hamilton. She has extensive fundraising and managerial experience with the non-profit world through work with Business Council for Peace and Habitat for Humanity as well as other organizations.

I also spoke to Director of Development Maggie Goldfarb. 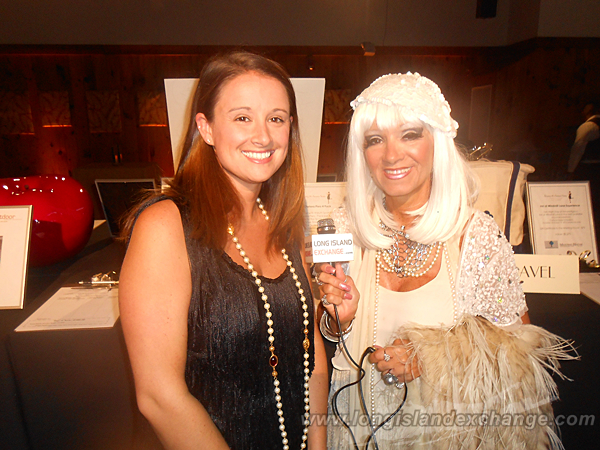 Director of Development Maggie Goldfarb with Cognac at the All Against Abuse Summer Party at the Ross School Lower Campus Field House located at 739 Butter Lane in Bridgehampton on Saturday June 20th, 2015.

Maggie explain to my audience what we can expect tonight.

Maggie: It’s the 20th Anniversary of “All Against Abuse” which supports the Retreat’s domestic violence services and tonight we have a wonderful cocktail hour with about 40 silent auction items ranging in everything from art to beauty to travel experience….a bunch of different things and then guests will going in for dinner and dancing of course and we have a live auction as well with a bunch of local and non-local artists a trip to Ireland, a trip to Jamaica and other special experiences.

Now I understand you are having a very special family…the Clemente’s…tell my audience why they are receiving this award and why they are tonight’s honorees.

Maggie: Well tonight it is Ann and Constantine Clemente and they have been supportive for a number of years to the Retreat. Their daughter Stephanie was a tireless volunteer in our shelter a few years ago and they have been incredibly supportive to us and we wanted to recognize them for that support.

I understand they are not attending the event. I heard their son is going to accept the award. Who is that?

Maggie: Dr. Arthur Clemente and his wife Estrella will be accepting the award on their behalf.

Maggie Goldfarb is Director of Development at The Retreat. She joined the team in June 2014 as a highly enthusiastic and motivated member. Her principal role is to support the mission, goals and objectives of the Retreat by developing and implementing short and long-term fundraising goals. Her heart has always been in the not-for-profit world and she believes strongly in helping others.

Prior to The Retreat, Ms.Goldfarb served as the Capital Campaign Coordinator at East End Hospice, organizing an $8 million campaign to construct an inpatient facility, and as Development Coordinator at Southampton Hospital, where she planned two major fundraising events raising over $1.6 million annually. Ms.Goldfarb holds a Bachelor of Arts in Communications and Public Relations from James Madison University. She grew up in Southampton and currently resides there.

Radio Host and Realtor Amy Cerullo served as guest speaker for the event.

The Retreat provides a local residential shelter for women and children, a 24-hour crisis hotline, counseling, legal advocacy, programs to engage troubled fathers who may be at risk of committing family violence and an in-school violence prevention education program. All services are provided free of charge.