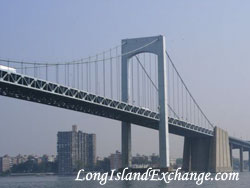 The Throgs Neck Bridge is a suspension bridge carrying Interstate 295 over the East River and connects the Throgs Neck section of the Bronx with the Bayside section of Queens, New York. The bridge has a span of 1800 feet (549 m) long, with an anchorage to anchorage total length of 2910 feet (887 m). It was designed without non-motorized access of any kind. There are also no regularly scheduled buses.

On the Queens side, the TBTA moved 421 homes from the right-of-way of the Clearview Expressway to the site of the Bayside and Oakland golf courses. On the Bronx side, the TBTA obtained a right-of-way easement from SUNY-Maritime at Fort Schuyler in exchange for an adjacent landfill project on their property. Material dredged from the East River for the bridge footings was used for the new landfill.

Robert Moses is the person who originally planned and managed the Throgs Neck Bridge. His first plan for a Throgs Neck span dates back to 1945, six years after his last project, the Bronx-Whitestone Bridge, was completed two miles to the west. This bridge was one of the few not intended for the Belt System of highways wrapping around Queens and Brooklyn. Moses commissioned famed New York City bridge designer Othmar Ammann.

An approximation cost of $92 million was entirely financed by TBTA bonds, and its approach roads were financed under the Federal-aid Interstate highway system. Originally designated I-495 when it was in its planning stages, the bridge received the I-78 designation when it was under construction in December 1958. It did not receive the I-295 designation until 1971. The Throgs Neck Bridge was first opened to traffic on January 11, 1961.

The massive growth in traffic between Queens and the and the Bronx may be measured by the fact that the Whitestone and its modern partner, the Throgs Neck Bridge each carry as many vehicles as the Whitestone did alone as late as in 1960. At the time, it was expected to take 16 million vehicles away from the Bronx-Whitestone Bridge. However, instead of relieving traffic, the new span ultimately increased traffic from the Bronx and points north to Queens and Long Island. Aside from it, the bridge also honors John Throckmorton, a 17th century pioneering settler from across the Atlantic. The Throngs neck Bridge has a place of honor in the modern and continuing development of the Bronx and Queens.

According to the New York State Department of Transportation (NYSDOT), the recent Throgs Neck Bridge has an average of 105,000 vehicles use each day. Most of this traffic is bound for Long Island points to the south, and for New England points to the north. The Throngs Neck Bridge has a major role in vehicular flow between Queens and the Bronx, the restrictions on heavy trucks notwithstanding. It is also known to become the first in the Metropolitan Transport Authority’s basket with modern variable signs.