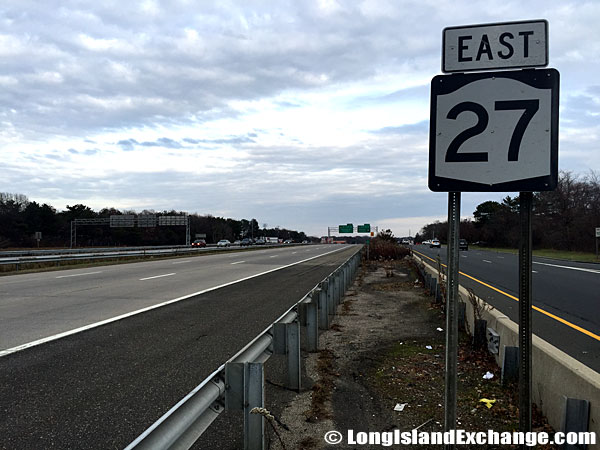 Sunrise Highway on the south side, eastbound near Nicolls Road.

The original Sunrise Highway was a four-to-six lane, at-grade arterial highway from southern Queens east to Massapequa, Nassau County. Constructed in the 1920’s it was extended to Great River, Suffolk County by 1940, and to Phyllis Drive in East Patchogue by 1953. In fact, Phyllis Drive originally had the NY 27 designation up to Montauk Highway. The latter became 27A and as Sunrise Highway grew, completed sections bore the sign NY 27. 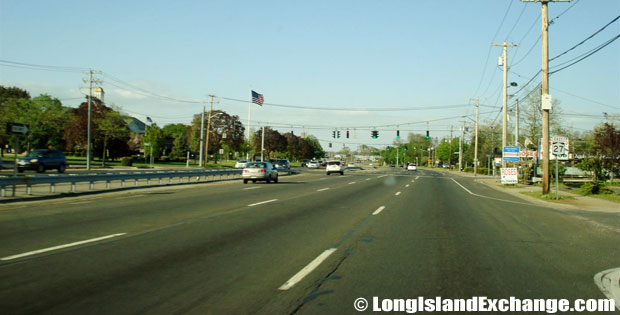 Sunrise Highway is divided highway with many shopping centers and gasoline stations alongside. The road is open to all vehicles and serves highly populated areas. The construction was finally completed in 1998, nearly four decades after the idea was first mooted. The original plans for a controlled-access Sunrise Highway date back to 1936, when the Regional Plan Association (RPA) recommended building a South Shore expressway from Brooklyn east to Patchogue.

The construction was not without its obstructions and problems. There was concern about building a four-lane, limited-access Sunrise Highway through the environmentally sensitive Pine Barrens between Eastport and Hampton Bays. Today, the lack of adequate service roads through the Oakdale merge aggravates rush hour conditions. At the eastern terminus in Shinnecock Hills, two eastbound highway lanes combine with an eastbound lane from North Road into a single eastbound lane. This Shinnecock squeeze causes long delays. 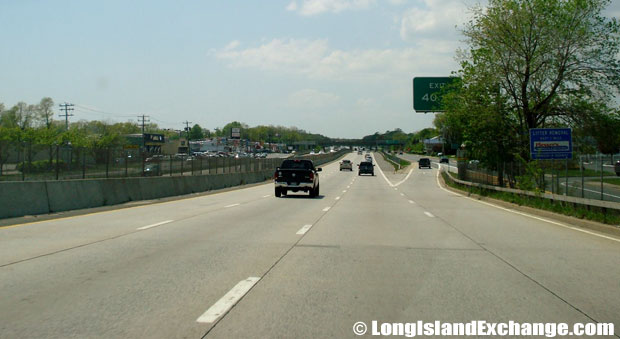 Sunrise Highway has known many changes. The original proposal was to extend the expressway from New York City east to Montauk Point. This was modified to build a 50-mile-long, controlled-access Sunrise Highway from West Babylon to Southampton. In the 1960’s, there was a move to extend further east to Amagansett. In 1997, the New York State Legislature designated the entire length of NY 27 in Queens, Nassau and Suffolk counties as the “POW-MIA Memorial Highway.” 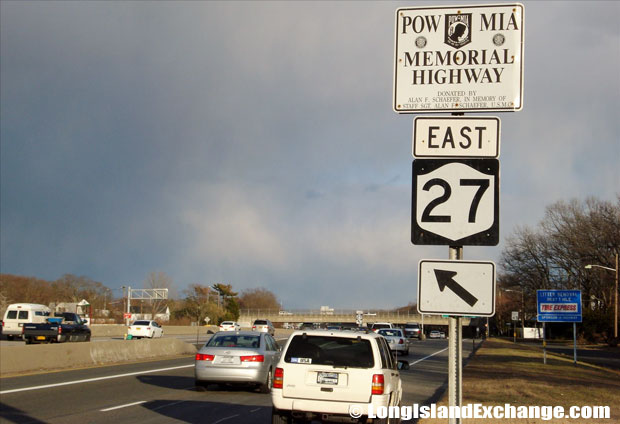 Sunrise Highway in Nassau has had several deaths of pedestrians trying to cross the road. Sunrise Highway has a lot of business activity and many reasons for people to walk there. It is a highway design serving the function of a main street. In effect, there are 10 lanes of traffic, or sometimes, 6 lanes of very fast moving traffic. Pedestrians also cross near Massapequa train station, and not usually when the light is green or at pedestrian crosswalks. Most people who park along the road in the morning dart across the highway rather than walk a crosswalk.

Business along the eastbound Sunrise Highway service road in Oakdale received a fillip in 1999 when a new eastbound exit ramp – EXIT 47 – was constructed for Pond Road South. During 2000 and 2001, the center median between EXIT 39 and EXIT 44 was refitted with a four-foot-high, concrete “Jersey” barrier. NYSDOT built a multi-use trail on the north side of Sunrise Highway in the area of Connetquot State Park.